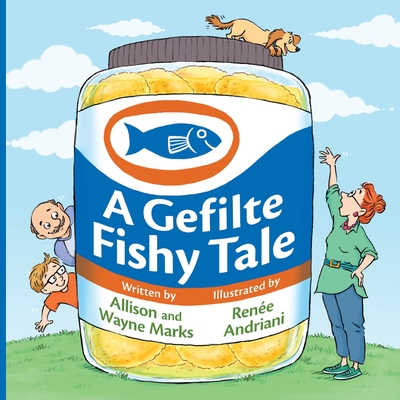 It's Friday morning and, as usual, Bubbe Judy has brought home a giant jar of gefilte fish-her grandson Jack's favorite dish-for the family's Shabbos meal. But something is wrong: the lid is stuck. Oy That's when the excitement begins

Bubbe, Zayde, and Jack-along with their dog, Butterscotch-schlep (drag) the jar all over town, seeking assistance from a dentist, a bodybuilder, an inventor, and other friends. But no one can unscrew that lid. Such tsuris (grief) When aunts, uncles, and cousins arrive for dinner, they try to help, too. Giggles and groans fill the air as everyone takes a turn.

Will that lid ever pop off? Find out in this humorous gefilte fishy tale, lightly sprinkled with Yiddish. More fun is inside with a recipe for delicious gefilte fish mini muffins, a new song for Shabbos, and a Yiddish-English glossary for the whole mishpocha (family)

ALLISON AND WAYNE MARKS met in a Canterbury Tales class at the University of Cincinnati while finishing their degrees in English literature. Today, they spend many an afternoon spinning stories of their own as a husband-and-wife writing duo. Allison received her MLS from the University of Kentucky and worked over two decades as the librarian at Temple Israel synagogue in Akron, Ohio. She also spent six years reviewing Jewish children's books for the Association of Jewish Libraries newsletter. Wayne has worked as a proofreader and copywriter at a North Canton, Ohio, marketing company for 25 years. Allison enjoys reading, journal writing, and filling her urban garden with morning glories, Shasta daisies, and heirloom tomatoes. Wayne plays fiddle in several local bands, sings bass in Akron's Gaelic choir, and pens novelty tunes, such as the YouTube hit "The Wiener Dog Song." They are the authors of "Og's Ark" (Kar-Ben) and "A Gefilte Fishy Tale" (MB Publishing). They live in a 100-year-old home in Akron, where they raised twins, Elliott and Claire.
Loading...
or support indie stores by buying on