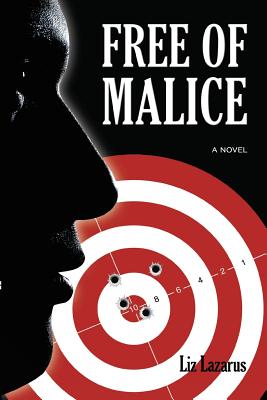 Loosely based on the personal experience of author Liz Lazarus, Free of Malice is a page-turner full of drama and suspense with unexpected twists.

Set in Atlanta, main character Laura Holland, a rising journalist, endures a night of terror when she is attacked in her home in the middle of the night. "I remember seeing the diamond of my engagement ring sparkle in the dim night as he thrashed his head. This was the only time I caught a glimpse of his dark face, with my fingers in his mouth. He did not seem human, but like a rabid beast attacking me in the night." Although she fights off the would-be rapist, his parting words are a threat to return. At the urging of her husband, Laura undergoes therapy to recover from the trauma, learning about a relatively new technique called EMDR (Eye Movement Desensitization and Reprocessing) used for PTSD (Posttraumatic Stress Disorder) patients. But just when the reader feels a sense of where this book is headed--the story of a woman healing--the plot veers in a new direction.

Though Laura did not own a gun at the time, she wishes she could have shot her attacker as he fled. When she learns that her actions might not have been deemed self-defense, her journalistic instincts are kindled. Laura decides to write a hypothetical legal case, which plays out the events of that night had she shot and killed her assailant. She enlists the help of a young, black attorney, Thomas Bennett. Though Thomas proves to be clever in the rules of the criminal justice system, his striking resemblance to her attacker does not go unnoticed. As the two work together to develop the case, Laura's discomfort escalates, particularly when Thomas seems to know more about that night than he should. Could he possibly be her assailant or is Laura being hyper-vigilant? Reality and fiction soon merge as her real life drama begins to mirror the fiction she's trying to create.

As an added bonus, we invite you to listen to "Let Me Breathe", the song that is described in the book. The piece was written by Thomas Barnette, one of the author's best friends and the inspiration for the lawyer character. "Let Me Breathe" was co-produced by Liz Lazarus.