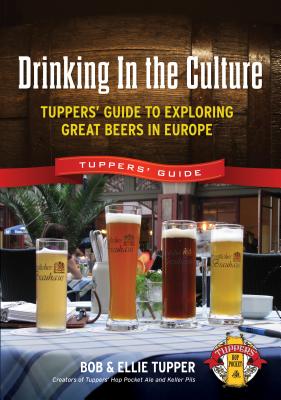 Drinking In the Culture

Title: Drinking In the Culture: Tuppers' Guide to Exploring Great Beers in Europe

Drinking In the Culture is the first ever guide to finding, not just good beer, but good beer places, in two dozen of the best cities in the world to drink local beer.  From the universities of Sheffield, England, to the historic palaces of Prague, from the well-known beer mecca of Brussels to the little Bavarian gem of Passau, here are gardens, cellars, plazas and ancient halls, all featuring unique and superb local brews amid the rich history and culture of Europe.

This is a book not just about beer or about travel, but about the rich connections between beers and the societies that brew them.  For each of the 24 cities, this versatile guide offers:

? A quick orientation to the city as you arrive

? The history and culture of the city and how they have affected the local brewing culture

? A “sixpack” or more of the best places—brewpubs, gardens, festivals, and breweries—to discover the beers of that city and region

? Suggestions for hotels and out-of-the-ordinary sights

? Side trips and excursions for more good beer

? Plus local advice, travel strategies, and tips on getting there, getting around, and staying safe

In Drinking In the Culture, the Tuppers share what they have learned about European beer travel.  For everyone from boots-on-the-ground beer geeks to armchair travelers, this book offers an anecdotal and affectionate view of the hundreds of rich and distinctive beer-drinking experiences Europe has to offer.

Bob and Ellie Tupper began taking notes on beer in 1979 and have amassed a database with over 28,000 entries. Their 35-year quest to find new beers has taken them all over the U.S. and through the best of Europe’s brewing regions. Bob Tupper has conducted beer tastings and lectures for over 30 years, including a regular invitational series at Washington, DC’s legendary Brickskeller. He has taught high school history and government for 46 years, while Ellie is a writer and editor for an international scientific society. In Drinking In the Culture, the Tuppers share their experience, anecdotes, and practical advice gleaned from years of traveling, tasting beers, and talking with some of the best brewers in the world.