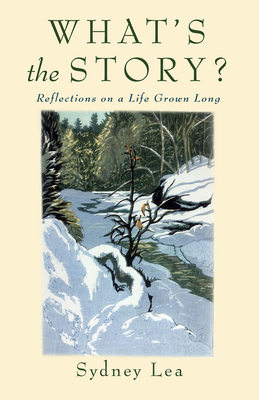 Reflections On A Life Grown Long

What’s the Story? Reflections on a Life Grown Long is, in many ways, a kaleidoscopic chronicle of this ongoing search. By turns elegiac, humorous, sad, joyful, angry –and often many of these at once– this book of extremely short prose reflections entertains an abiding question for Lea: to what extent does “my” version of what happens in this life and in the world at large coincide with some imagined “real” version? If the author had an opinionated, positive answer to such a question when young, life has imposed a degree of humility upon him in older age, whether he wants it or not.

What’s the Story? is less notable, then, for the conclusions it reaches at any given point than for its compelling witness to what poet Wallace Stevens called “the mind in the act of finding what will suffice.”

Sydney Lea was Vermont's 2011-2015 Poet Laureate. He has published numerous books in multiple genres, among them Pursuit of a Wound, a finalist for the 2001 Pulitzer Prize for poetry. He is the founder of New England Review and has been awarded Rockefeller, Fulbright, and Guggenheim fellowships; he has taught at Dartmouth, Yale, Wesleyan, Vermont, and Middlebury colleges, as well as at Switzerland's Franklin College and Budapest's National Hungarian University. His stories, poems, essays and criticism have appeared in The New Yorker, The Atlantic, The New Republic, The New York Times, Sports Illustrated and many other periodicals, as well as in more than fifty anthologies. He lives in Newbury, Vermont, and he is active both in community literacy efforts and in environmental conservation.