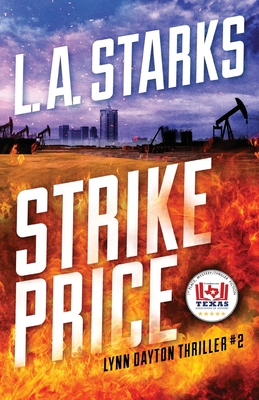 Murder disrupts a billion-dollar oil deal STRIKE PRICE is a story about a business deal turned deadly, concluding with a plot to destroy a hidden, crucial US oil center and bring the US into confrontation with another global power. To stop the plot and save lives, up-by-the-bootstraps Lynn Dayton must trust a Cherokee elder who carries a corrosive secret. Exclusively in the print edition, STRIKE PRICE features authentic Cherokee syllabary text in clues that tie fascinating Native American history to global high-stakes drama today. "If you're looking for big business wheeling-and dealing, international intrigue, murder, mayhem and high-geared action, you've come to the right place. Toss in a charming and nervy protagonist like Lynn Dayton and L.A. Starks' STRIKE PRICE is right on the money. Well-written, well-plotted and well worth a reader's time..." Carlton Stowers - - - two-time Edgar winner "STRIKE PRICE takes the reader from Oklahoma Indian reservations to the streets of Florence, in an imaginative and well informed fusion of oil refining economics, Native American politics, and the potential for lethal mayhem in the global energy market." Michael Ennis - - - author of New York Times bestseller, The Malice of Fortune "Plan on not sleeping tonight." James Gary Vineyard - - - author of The Grave On Peckerwood Hill "Fast-paced and convincingly choreographed, Starks' novel presents a spot-on depiction of today's oil business that grips and scares and offers the reader plenty to think about." Richard Holcroft - - - author of Patriot's Blood Summary: When several people involved in bidding for an oil refinery are murdered, the situation becomes far more than a billion-dollar business deal. A self-made woman in the oil industry, Lynn Dayton fights to save lives when escalating attacks reveal a hired assassin's plan to disrupt oil trade, wreck world economies, and draw another global power into dangerous confrontation with the United States. Are the killers rogue civil servants challenging the Cherokees' financial independence, Sansei operatives again wreaking violence, or sinister investors swapping the bidding war for a real one? Lynn Dayton and Cherokee tribal executive Jesse Drum must learn to trust each other so they can find and stop the killers. Can sobering up really be fatal? How have so many of the deaths been made to appear accidental? Who's creating weapons with modern poisons and ancient Cherokee arts? Author: L. A. Starks was born in Boston, Massachusetts, grew up in northern Oklahoma, and now lives in Texas. Awarded a full-tuition college scholarship, she earned a chemical engineering bachelor's degree, magna cum laude, from New Orleans' Tulane University, followed by a finance MBA from the University of Chicago Booth School of Business. While at Chicago she made time to play for a celebrated women's intramural basketball team, the Efficient Mockettes. Working for well-known energy companies in engineering, marketing, and finance from refineries to corporate offices prepared Starks to write global energy thrillers. She continues to write and consult on energy economics and investing through her company, Starks Energy Economics. In addition to her two Lynn Dayton books, 13 DAYS: THE PYTHAGORAS CONSPIRACY and STRIKE PRICE, her nonfiction has appeared in Mystery Readers Journal, The Dallas Morning News, The Houston Chronicle, The San Antonio Express-News, Sleuth Sayer (MWA-SW newsletter), Natural Gas, Oil and Gas Journal, and investor website Seeking Alpha. Starks is a co-inventor of a US patent. She has run eight half-marathons, and she serves on the Board of the Friends of the Dallas Public Library, a fund-raising and advocacy group that supports Dallas' 29-branch civic library system.