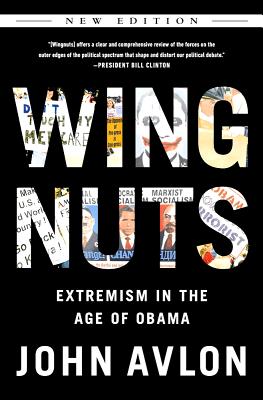 Extremism in the Age of Obama

Wingnuts exist on the extreme edges of the political spectrum. They're the professional polarizers and the unhinged activists, the hardcore haters and the paranoid conspiracy theorists. They're people who always try to divide us instead of unite us. And at a time when the fringe is blurring with the base, they've hijacked American politics.

The Obama era has been a boom-time for Wingnuts, kicked off by a financial collapse and the election America's first black president. For some, losing an election feels like living under tyranny. John Avlon tracks down preachers who pray for the president's death, goes inside the growing "Hatriot" militia movement, and identifies the fright-wing swamp where the Obama "Birthers" and the Bush-era "9/11 Truthers" bubble up.

Wingnuts echo earlier fear-fueled movements in American history. But bolstered by the rise of hyper-partisan media, the Wingnut echo chamber is more influential than ever before and it has led directly to the division and dysfunction in Congress. Avlon asserts that the time has come for the moderate majority of Americans to straighten their civic backbone and hold the extremes accountable while restoring a sense of perspective to our politics.

John Avlon is an author, columnist and editor-in-chief of the Daily Beast.
Loading...
or support indie stores by buying on