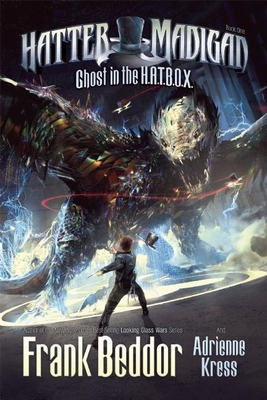 Ghost in the Hatbox

An exciting new adventure featuring a teenaged Hatter Madigan, one of the most popular character from the New York Times best-selling The Looking Glass Wars trilogy by Frank Beddor Combat training Secret society initiations Self-serving rivals Welcome to Wonderland's prestigious Millinery Academy: where those born to protect the queendom train to become spies, assassins, and bodyguards. With all that to contend with, not to mention following in his popular older brother's footsteps, just getting through Imagination Class seems impossible already. And that's before he starts seeing ghosts lurking in the corridors... When students begin behaving strangely throughout the academy, Hatter and his fellow cadets must unlock the mysteries behind the ghosts, and the headmaster's suspicious behavior, before the entire student body finds itself possessed Join Hatter and his fellow cadets on their first adventures in Wonderland. Let's just hope it isn't their last.

Literary Sleuth and world creator Frank Beddor dared to expose the true story of Wonderland in the "New York Times" bestselling young adult trilogy "The Looking Glass Wars." To satisfy the awakened curiosity of his readers he continued to tell the parallel adventures of Royal Bodyguard Hatter Madigan s search for the lost princess in the graphic novel series "Hatter M." He lives in Los Angeles. Adrienne Kress is a Toronto-born actor and author of the internationally published and award winning children s novels "Alex and the Ironic Gentleman" and "Timothy and the Dragon s Gate," as well as the young adult novels, "The Friday Society" and "Outcast." In late 2015 her essay appeared in the non-fiction anthology "The Secret Loves of Geek Girls" and in the fall of 2016 she will be releasing the first book in an upcoming middle grade series, "The Explorers Club."