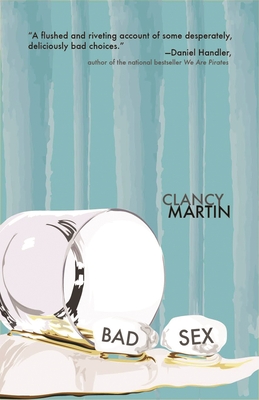 "I drink, I hurt myself and the people around me, and then I write." Brett is in Central America, away from her husband, when she begins a love affair with his friend, Eduard. Tragedy and comedy are properly joined at the hip in this loosely autobiographical book about infidelity, drinking, and the postponing of repercussions under the sun. Though coming undone is something we all try to avoid, Martin reminds us that going off the rails is sometimes a part of the ride.

Clancy Martin is a Canadian philosopher, novelist, essayist and translator. His debut novel How to Sell (Farrar, Straus and Giroux) was a Times Literary Supplement Best Book of 2009, and a Best Book of 2009 for The Guardian, Publisher's Weekly, The Kansas City Star. He is a Guggenheim Fellow, and is a contributing editor at Harper's Magazine. He is Professor of Philosophy at the University of Missouri in Kansas City, and is Professor of Business Ethics at the Bloch School of Management (UMKC). His writing has appeared in Harper's, The New York Times, The Wall Street Journal, The London Review of Books, The Atlantic, The Times Literary Supplement, Ethics, The Journal of the History of Philosophy, GQ, Esquire, Details, Bookforum, Vice, Men's Journal, and many other newspapers, magazines and journals, and has been translated into more than thirty languages. He has also won DAAD Fellowships and the Pushcart Prize. He just published a book of essays with FSG called Love and Lies. He has three daughters, Zelly, Margaret and Portia. He is married to the writer Amie Barrodale.
Loading...
or support indie stores by buying on