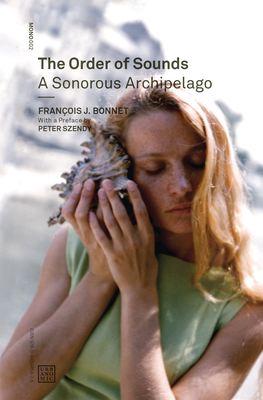 The Order of Sounds

This study of the subtlety, complexity, and variety of modes of hearing maps out a “sonorous archipelago”—a heterogeneous set of shifting sonic territories shaped by the vicissitudes of desire and discourse.

Profoundly intimate yet immediately giving onto distant spaces, both an “organ of fear” and an echo chamber of anticipated pleasures, an uncontrollable flow subject to unconscious selection and augmentation, the subtlety, complexity, and variety of modes of hearing has meant that sound has rarely received the same philosophical attention as the visual.

In The Order of Sounds, François J. Bonnet makes a compelling case for the irreducible heterogeneity of “sound,” navigating between the physical models constructed by psychophysics and refined through recording technologies, and the synthetic production of what is heard. From primitive vigilance and sonic mythologies to digital sampling and sound installations, he examines the ways in which we make sound speak to us, in an analysis of listening as a plurivocal phenomenon drawing on Foucault, Deleuze and Guattari, Barthes, Nancy, Adorno, and de Certeau, and experimental pioneers such as Tesla, Bell, and Raudive. Stringent critiques of the “soundscape” and “reduced listening” demonstrate that univocal ontologies of sound are always partial and politicized; for listening is always a selective fetishism, a hallucination of sound filtered by desire and convention, territorialized by discourse and its authorities.

Bonnet proposes neither a disciplined listening that targets sound “itself,” nor an “ocean of sound” in which we might lose ourselves, but instead maps out a sonorous archipelago—a heterogeneous set of shifting sonic territories shaped and aggregated by the vicissitudes of desire and discourse.


Praise For The Order of Sounds: A Sonorous Archipelago (Urbanomic / Mono #2)…

Operating at high theoretical altitude, in The Order of Sounds, François Bonnet sets himself a Herculean task: nothing less than the retheorisation of sound as such.—Drew Daniels, THE WIRE—

To the theoretical propensities imprinted on the domain of sound by a rational order, François J. Bonnet opposes a veritable thinking of disorder, a “sonorous archipelago” rather than a “theory of sound.” This unprecedented and salutary enterprise outlines a new path for a future “acoulogy.”

Bonnet's writing, dense, full of unexpected turns and remarks, is intelligent and meticulous.

Robin Mackay is a philosopher, Director of the UK arts organization Urbanomic, and Associate Researcher at Goldsmiths University of London.
Loading...
or support indie stores by buying on