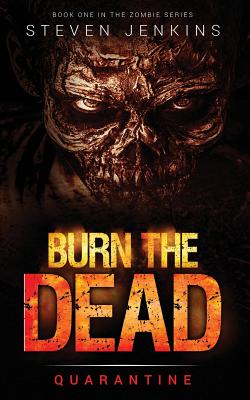 Quarantine (Book One In The Zombie Saga)

It's a profession that pays the bills and plays tricks on the mind. Still, his life is routine until his four-year-old son becomes stranded in a quarantined zone, teeming with rotters.

Does Rob have what it takes to fight the undead and put his broken family back together?

Or will he also end up in the incinerator - burning with the rest of the dead?

"If you're looking for a fast-paced zombie read, I highly recommend Burn The Dead by Steven Jenkins. (5-STARS)"
K.C. FINN - Readers' Favorite

Steven Jenkins was born in the small Welsh town of Llanelli, where he began writing stories at the age of eight, inspired by '80s horror movies and novels by Richard Matheson. During Steven's teenage years, he became a great lover of writing dark and twisted poems - six of which gained him publications with Poetry Now, Brownstone Books, and Strong Words. Over the next few years, as well as becoming a husband and father, Steven spent his free time writing short stories, achieving further publication with Dark Moon Digest. His terrifying tales of the afterlife and zombies gained him positive reviews, particularly his story, Burning Ambition, which also came runner up in a Five-Stop-Story contest. And in 2014 his debut novel, Fourteen Days was published by Barking Rain Press. You can find out more about Steven Jenkins at his website, www.steven-jenkins.com or on Facebook (www.facebook.com/stevenjenkinsauthor) and on Twitter (twitter.com/Author_Jenkins)
Loading...
or support indie stores by buying on