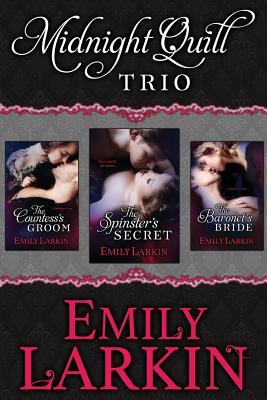 The Countess's Groom (A novella)
Rose, the Countess Malmstoke, is trapped in a violent marriage. Escape seems impossible--until her horse groom, Will Fenmore, offers to help her.

The Spinster's Secret (A novel)
Matilda Chapple is penniless, orphaned, and dependent on her uncle's grim charity--but she's finally found a way to escape: she'll write her way to financial freedom.
When Mattie pens a series of titillating short stories, she starts earning money ... and notoriety. Her secret is safe--until battle-scarred Waterloo veteran, Edward Kane, agrees to uncover the anonymous author's identity.
Can Mattie conceal the secret of her scandalous writings, or will Edward discover that the virginal spinster and the risqu authoress are one and the same person?

The Baronet's Bride (A novella)
Sir Gareth Locke lost an arm at Waterloo. He's in love with his new bride--but he's dreading their wedding night. He knows it will be an ordeal: clumsy, awkward, and mortifying.
Cecily Locke knows what to expect in the marriage bed--after all, she's been married once before. It will be uncomfortable and a little messy, but over quickly enough.
But Cecily and Gareth are about to have a wedding night that neither of them expects...