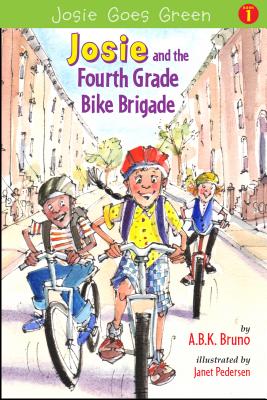 Nine year old Josie Garcia is a feisty and optimistic girl from Brooklyn who becomes a crusader for preventing disastrous climate change and other environmental threats. In each book, Josie takes simple, ingenious actions that bring real changes to her neighborhood and the world. As the protagonist in the series, she will inspire young readers to understand environmental issues and take action.After a summer with Grandma in Ecuador and an enlightening class trip to the zoo, where she encounters Frozey the Polar Bear, Josie decides that it is time to take action to slow global warming.  Her first idea for Going Green is to organize her grade to drive less by forming the Fourth Grade Bike Brigade. Her best friends, Matt and Lizzy, along with her brother Damien and other characters from the neighborhood, go along for the ride.  But not everyone is in favor of the plan, and when things don't go smoothly, trouble begins for Josie and the Bike Brigade.  This series is conceived and written by Antonia Bruno and her parents, Kenny Bruno and Beth Handman, known collectively as A.B.K. Bruno.

Beth has been a teacher, educational consultant, curriculum specialist, staff developer and administrator for over 30 years. At her current school, P.S. 321, she collaborates closely with Teachers College Reading and Writing Project at Columbia University. Beth has been a Lucretia Crocker Fellow for the state of Massachusetts and has consulted extensively for New Visions for Public Schools. As a supervisor of literacy and curriculum, Beth guides the pedagogical aspects of the Josie series.

Josie Meets a Jaguar is co-authored by the Bruno/Handman family—Beth, Kenny, Antonia, and Benjy. The series is inspired by the enthusiasm of the students from P.S. 321, where Beth is Assistant Principal and Benjy and Antonia attended elementary school. Kenny works coordinating environmental campaigns. Benjy teaches ESL and and outdoor skills for children. Antonia works for Global Alliance for Incinerator Alternatives as a grant writer and communications coordinator. The family is from Brooklyn, New York.

Antonia is a Political Science major at SUNY Binghamton. She has won awards from the Brooklyn Poet Laureate, the CUNY N.Y.C. Annual Poetry Festival and the Random House Writing Competition. In High School, Antonia wrote with Girls Write Now, A New York City-based organization that works with aspiring young women writers. She has been the President of her campus chapter of DemocracyMatters. Antonia sets the tone of the Josie series and creates characters that elementary school kids can relate to.

Janet Pedersen has illustrated many books for children, as well as authored a few herself. She is the author and illustrator of Houdini the Amazing Caterpillar (Clarion Books) and Millie in the Meadow (Candlewick Press). Janet lives with her family in Brooklyn, in a neighborhood a little like Josie's.