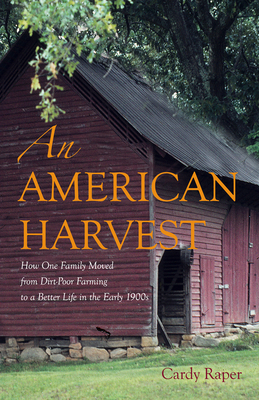 Green Writers Press is proud to announce the first book in our place-based history series, An American Harvest: How One Family Moved from Dirt-Poor Farming to a Better Life in the Early 1900s, by Vermont writer and University of Vermont professor emerita, Cardy Raper, PhD.

Sometimes sad, sometimes humorous, sometimes scandalous, An American Harvest is the real-life tale of seven brothers and one sister who grew up dirt poor on a worn-out tobacco farm in North Carolina, but, with strong parental guidance, went on to achieve distinguished careers in a variety of fields.

An American Harvest is largely in the format of discourse among the Raper siblings as they agree and disagree about their farming childhood together, and how that childhood shaped their skills to attain remarkable success in a diversity of professions. Their conversations derive from a tape recorded at a family reunion several decades ago, in 1965. They speak of what it was like to live the uncertain life of a growing family in the rural South trying to eke out a living from eroded land without the conveniences of running water, electricity, central heating, or mechanical devices during the early part of the twentieth century. They recall a childhood of relentless farm chores, arduous food preparations, strict moral mandates, strong religious teachings, along with a smattering of scandalous tales and experiences. The Raper children developed a yen to achieve higher education, even though their parents never exceeded grade school.

The author reflects occasionally on the topics discussed, but she lets the oral history of a remarkable family from rural North Carolina do the talking. This account takes the reader to a time of change that could likely happen only in America. Ms. Raper has recorded a wonderfully authentic swatch of Southern Americana, ranging from tobacco raising to hog butchering, old-time revivals to neighborhood corn shucking, and clannish feuds, to helping one’s neighbors in times of need.

The manuscript, including 34 photographs, is organized in 13 chapters. Chapter headings are derived from aphorisms the siblings had to learn as children


Praise For An American Harvest: How One Family Moved From Dirt-Poor Farming To A Better Life In The Early 1900s…

“In the tradition of the Foxfire Series, a wonderfully authentic swatch of Americana ranging from tobacco raising to hog butchering, old-time revivals to community corn-shucking, and clannish feuds to mutual help in times of need . . . a loving evocation of a hard way to live. I loved these stories.” — Howard Frank Mosher, author of Walking to Gatlinburg

“Cardy Raper ably shows how the family’s success was forged in an environment marked by incessant hard work, strong moral and ethical values, active civic engagement, and perhaps above all a thirst for education. The work offers a window into an American way of life that seems long ago and far away a century later.” — Clifford M. Kuhn, Georgia State University, author of At the Crossroads: Arthur Raper, the South, and the World, University of North Carolina Press

Cardy Raper received a Masters in Science degree from The University of Chicago and a PhD from Harvard University. She has been extensively published in national and international scientific journals and was named a University of Vermont Research Professor Emerita in Microbiology and Molecular Genetics. She was recently honored by being elected Fellow of the American Association for the Advancement of Science. She is the author of A Woman of Science: An Extraordinary Journey of Love, Discovery, and the Sex Life of Mushrooms.