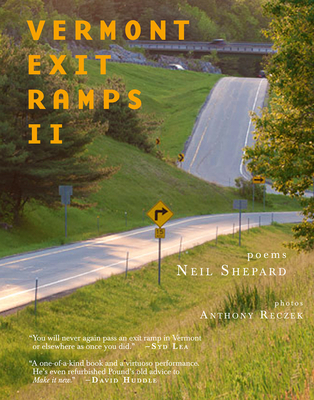 By turns comic and elegiac, full of signs and portents, Vermont Exit Ramps II takes readers on a physical and emotional journey through the Green Mountain State. Combining a reporter’s instincts with a poet’s eyes and ears, Shepard invites the reader, exit ramp by exit ramp, to wander through the surrounding ramplands, towns, and hilltop farms and to discover historical realities and imagined alternatives. Through his lyrical reportage, Shepard incorporates “found” material—road signage and weather reports, birdcalls and mammal-chatter, Chinese fortune cookies and scrambled anagrams, snippets of literary texts and local pamphlets—into poems that are as layered as the natural and human history that make up contemporary Vermont. This virtuosic performance will serve as a spirited primer for first-time visitors while making long-time Vermonters see the land they thought they knew with fresh eyes.

Neil Shepard is the author of seven books of poetry including Hominid Up (Salmon Poetry, 2015), (T)ravel/Un(t)ravel (Mid-List Press, 2011), This Far from the Source (Mid-List, 2006), I’m Here Because I Lost My Way (Mid-List, 1998), and Scavenging the Country for a Heartbeat (First Book Award, Mid-List Press, 1993) and the chapbook, Vermont Exit Ramps (Big Table Publishing, 2012), His poems appear in several hundred literary magazines, have been nominated numerous times for the Pushcart Prize, and have been featured online at Poetry Daily,Verse Daily, and Poem-A-Day (from the Academy of American Poets). Shepard has been a fellow at the MacDowell Arts Colony and the Virginia Center for the Creative Arts, and he has been a visiting writer at the Chautauqua Writers Institute and The Frost Place. He founded and directed for eight years the Writing Program at the Vermont Studio Center, and he taught for several decades in the BFA Creative Writing Program at Johnson State College in Vermont until his retirement in 2009. He also founded the literary magazine Green Mountains Review and was the Senior Editor for a quarter-century. He currently splits his time between Vermont and New York City, where he teaches poetry workshops at The Poets House and in the low-residency MFA writing program at Wilkes University (PA). Outside of the literary realm, Neil is a founding member of the jazz-poetry group POJAZZ.

Anthony Reczek lives in New England where he pursues landscape, editorial and fine art photography.  He is a contributing photographer and writer for VERMONT magazine, and a contributing photographer for VERMONT LIFE, along with a number of other print and online publications. In 2010, he created an online gallery for his images of New England, www.anthonyreczek.com, and posts there twice weekly.