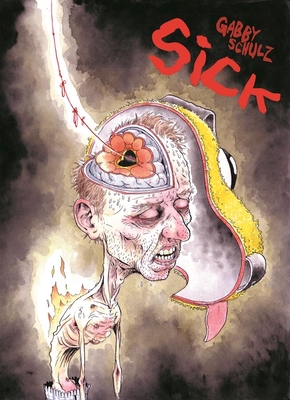 "Last year, he got our attention for his disturbingly brilliant graphic novel Monsters. . . . Gabby Schulz has gone on to create a similarly unnerving web comic series titled Sick."--Flavorwire

The author of the perennial classic, Monsters (written as Ken Dahl), Gabby Schulz returns with a new graphic novel, Sick, which Hicksville author Dylan Horrocks calls "a punch in the face and well worth reading." Like Monsters, Sick focuses on health and social policy, this time expanding from the subject of STDs and their stigma to the larger, hot-button issue of national healthcare.

Severely ill, uninsured, alone, and confined to his bed for weeks, Schulz was left searching--only to find himself. Sick documents his discovery in gory, glorious, water-colored detail, finally completed and collected here for the first time in a beautiful, album-sized hardcover edition.

Since Monsters, Schulz has produced a host of online comics including SEXISM, a viral sensation written up everywhere from the Stranger to Scientific American. The web-serialized Sick was an Ignatz Award nominee for Outstanding Online Comic. His work has appeared on narrative.ly and BuzzFeed and in Arthur magazine.

Gabby Schulz, sometimes known as Ken Dahl, grew up in Honolulu, Hawaii. His graphic novel, Monsters won two Ignatz Awards, was an Eisner Award nominee, and was a Best American Comics selection. His other works include the collection Welcome to the Dahl House and the web comic Sick, an Ignatz Award nominee for Outstanding Online Comic. Schulz currently resides in Chicago, Illinois.

Gabby Schulz - who sometimes goes by the name Ken Dahl - was born and raised in Honolulu, Hawai'i, and has spent most of his adult life in transit about the North American continent. His graphic novel, Monsters, won two Ignatz Awards, was nominated for an Eisner Award, and was included in the 2012 Best American Comics Anthology. He other works include a short story collection, Welcome to the Dahl House, and the web comic, Sick, an Ignatz Award nominee for Outstanding Online Comic, soon to be collected in a full color hardcover edition from Secret Acres. Gabby currently resides in Chicago, Illinois.
or
Not Currently Available for Direct Purchase
Copyright © 2020 American Booksellers Association