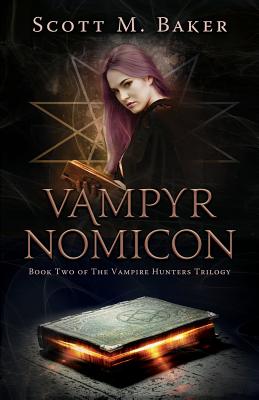 Within the vaults of the Smithsonian Institute lies the key to finding the Vampyrnomicon, the Book of the Undead, that contains the history and secrets of the vampires. According to legend, whoever possesses the book can establish a vampire nation on earth - or destroy the undead once and for all. With an opportunity to end the war against the undead so close, Drake Matthews is determined to find the book. But the vampires also want The Vampyrnomicon. When Master Chiang Shih and her coven of the most powerful and dangerous vampires arrive in Washington to claim the book as their own, the hunters find themselves facing their most dangerous enemy yet. With the stakes so high, so is the ferocity of the struggle.

Scott M. Baker was born and raised in Everett, Massachusetts and spent twenty-three years in northern Virginia working for the Central Intelligence Agency. Scott is now retired and lives in Gainesville, Florida as a full-time writer along with his wife and fellow author Alison Beightol and his stepdaughter. He has written Rotter World, Rotter Nation, and Rotter Apocalypse, his post-apocalyptic zombie trilogy; Yeitso, his homage to the giant monster movies of the 1950s that he loved watching as a kid; The Vampire Hunters trilogy, about humans fighting the undead in Washington D.C.; as well as the novella Nazi Ghouls from Space (the title says it all). He is currently working on a series of young adult post-apocalyptic novels, a horror techno-thriller, and a second series about Allied intelligence officers fighting Nazi occultism in World War II. Scott has also authored several short stories, including "Cruise of the Living Dead" (a zombie outbreak aboard a cruise ship), "Deck the Malls with Bowels of Holly" (an alcoholic mall Santa battles zombie reindeer), "Last Flight of the Bismarck" (steampunk zombies), "The Hunger" (cannibalism during a zombie apocalypse), "Lebenden Toten at the Gate" (Nazis versus zombies at Stalingrad), "From Space It Came" (a giant spider from space), and the novella Dead Water. When not writing, Scott can usually be found doting on the two boxers and two cats that kindly allow him to live with them. Please visit the author's website at http: \\scottmbakerauthor.blogspot.com.
Loading...
or support indie stores by buying on