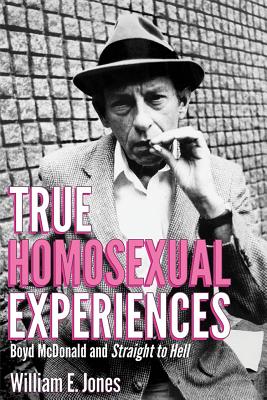 Boyd McDonald and Straight to Hell

Boyd McDonald (1925-1993) had the makings of a successful life in the 1950s-an education at Harvard, a job at Time/Life-but things didn't turn out as planned. After 20 years of resentful conformity and desperate alcoholism, McDonald dried out, pawned all of his suits, and went on welfare; it was then that his life truly began.
From a room in a New York SRO hotel, McDonald published Straight to Hell, a series of chapbooks collecting readers' true homosexual experiences. Following the example of Alfred Kinsey, McDonald obsessively pursued the truth about sex between men just as gay liberation began to tame America's sexual outlaws for the sake of legal recognition. Admired by such figures as Gore Vidal and William S. Burroughs, Straight to Hell combined a vigorous contempt for authority with a keen literary style, and was the precursor of the first queer 'zines decades later.
Containing in-depth interviews with friends and family members and a wealth of previously unpublished material, True Homosexual Experiences: Boyd McDonald and Straight to Hell is the first book devoted to this key figure of the American underground.