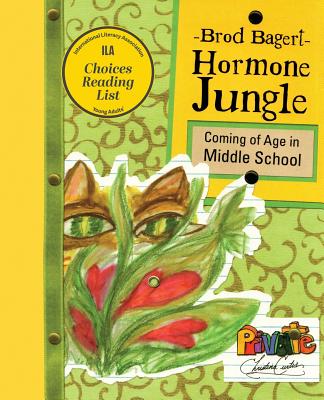 Coming of Age in Middle School

Like the surge of tidal flood waters that come right before a hurricane, angry feelings about the Steven Gilleys of the world began to rise inside me, and that's when it happened. The sound of an angry voice, the universal voice of the sixth-grade girl fed up with the pestilence of male immaturity, began to form in my head.

I sat down and wrote my first poem.

Open Christina's scrapbook and enter a world where girls rule and boys drool, where hormones rage, and where poetry captures the impassioned, lovesick, humiliated, and hilarious voice of the middle school student.

College-bound Christina Curtis scrapbooks her years in middle school as a memeber of the Digital Poets, a group of students who find their voices through verse. Weaving her own narrative into the poems of her peers, Christina tells the story of her friendship with Steven Gilley, the obnoxious girl-teasing, and "unbearably immature" boy who incites her to write her first poem. But Steven holds a secret that makes him wise beyond his years, leaving Christina to wonder if there isn't more to this "unbearable" boy than meets the eye.

From best friends and crushes, to underarm hair, and an all-out battle-of-the-sexes poetry war, the varied voices of the Digital Poets reflect both the humor and angst of middle school students coming of age in the Hormone Jungle.