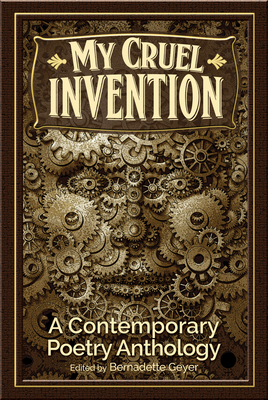 An outstanding collection of poetry about inventions and inventors, real and imagined, assembled by editor and poet, Bernadette Geyer, author of The Scabbard of Her Throat and a chapbook, What Remains.

“I was awed by the seemingly endless number of ways that poets approached the subject. Naturally, there are poems about real inventions—from clocks to pantyhose to chemotherapy drugs—as well as poems that conjure fantastical inventions—such as a contraption for kissing and a happy marriage machine.

While some of the poems in this anthology provide searing commentary on the dreadfulness of some of the creations birthed by inventors, other poems offer us a view into the stories behind inventions, as well as the lives of real and imagined inventors.

Whether invoking humor, irony, historic research, or imagination, the poems in this anthology converse not only with each other, but also with their readers and the world at large, in service to the continued human drive to create solutions—even to problems we didn’t know we had.” — Bernadette Geyer


Praise For My Cruel Invention: A Contemporary Poetry Anthology…

"This is a wonderful array of imaginers telling their wild secrets and what they believe possible." — Grace Cavalieri, Washington Independent Review of Books, December Exemplars

"It's true, the mother of invention might scoff at this delightful collection as being wholly unnecessary, but the rest of us will only marvel at the sixty-two poems focused on inventors and inventions." — Foreword Reviews

JOEL ALLEGRETTI is the author of five collections of poetry. His second, Father Silicon (The Poet’s Press, 2006), was selected by the Kansas City Star as one of 100 Noteworthy Books of 2006.  He is the editor of Rabbit Ears: TV Poems (NYQ Books, 2015), the first anthology of poetry about the mass medium.

MARJORIE MADDOX, Director of Creative Writing and Professor of English at Lock Haven University, has published nine collections of poetry—including Local News from Someplace Else, Perpendicular As I (Sandstone Book Award), and Transplant, Transport, Transubstantiation (Yellowglen Prize)—as well as over 450 stories, poems, and essays in journals and anthologies. She is co-editor of Common Wealth: Contemporary Poets on Pennsylvania and has two children’s books: A Crossing of Zebras: Animal Packs in Poetry and Rules of the Game: Baseball Poems. Her numerous honors include Cornell’s Chasen Award and Sage Graduate Fellowship for an MFA, the 2000 Paumanok Poetry Award, an Academy of American Poets Prize, the Seattle Review’s Bentley Prize for Poetry, a Bread Loaf Scholarship, and Pushcart Prize nominations in both poetry and fiction. She is the great-grandniece of baseball legend Branch Rickey, the general manager of the Brooklyn Dodgers who helped break the color barrier by signing Jackie Robinson.

BERNADETTE GEYER is the author of The Scabbard of Her Throat and recipient of a Strauss Fellowship from the Arts Council of Fairfax County (Virginia). Her poems have appeared in 2015 Poet’s Market, North American Review, Oxford American, Poet Lore, Verse Daily, and elsewhere. Geyer leads online workshops on writing and social media, and she works as a freelance writer, editor, and translator in Berlin, Germany.