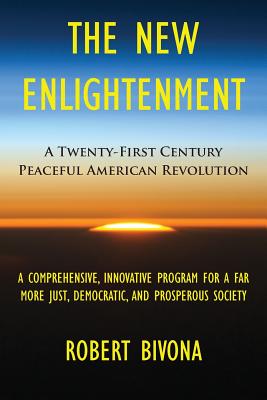 Our nation was born in the Age of Enlightenment when extreme economic and political inequalities motivated revolutions. Today, through peaceful means, we again require radical change for similar reasons. The New Enlightenment details the major public policy changes that are needed to create a fundamentally more just and democratic society. Reforms that compromise ideals in response to our dysfunctional political system would be a surrender, not an appropriate challenge to it.

The 34 public policies detailed will, if instituted: Lift tens of millions of Americans out of poverty to a standard of living that now exists in the middle class; substantially improve the standard of living of tens of millions more; fundamentally improve our election, lobbying and media systems; enhance democracy with an innovative, new democratic system, and congressional rules reforms; create a $300 billion annual federal surplus; increase GDP by $1.4 trillion. Costs or revenue gains resulting from instituting each policy is included. The New Enlightenment fully supports its policy proposals on economic, moral and other grounds, and promotes the formation of The New Enlightenment Citizen's Union (that may evolve into a new political party) as the organizational structure of the required political movement for the New Enlightenment transformations. All great social movements were founded on moral grounds. So the one we urgently need now also will be.

If Instituted The New Enlightenment policies will:

- End unemployment and reduce full-time work hours to 36 hours per week, while creating a minimum tax-free annual income of $34,980 for full-time work. Expanding and reforming the EITC and raising the minimum wage to $11.10 per hour will accomplish this. Everyone's take-home income whose income now is under $160,000 will rise, and rise proportionally more the lower the income due to lower taxes and the new EITC.

- Transform the economic system to one where most economic activity will be performed by worker-owned and controlled businesses at the end of the designed 20-year transition period.

- Institute a license renewal requirement for worker ownership and control of air media companies. Loans, grants, tax benefits, and subsidies will support the ownership transfer, as it would for other kinds of media businesses.

- Create shared prosperity and a true democracy through other beneficial programs.

The necessary revenues will be generated by the following taxes, which will also create a $300 billion annual surplus: - More progressive income tax rates with a 55% maximum rate. - A small, highly progressive wealth tax - Pollution taxes that will raise revenue and reduce pollution. - A corporate tax system that inherently will end tax haven abuse. - Reduce military and other expenditures. - A financial transactions tax. - Eliminate the cap on the employer social security portion of the payroll tax (employees at all income levels will pay no payroll tax). - Replace the estate tax with a progressive inheritance tax that increases taxes on large wealth transfers without forcing the sale of inherited family farms and other businesses.

Now is the time for a New Enlightenment.