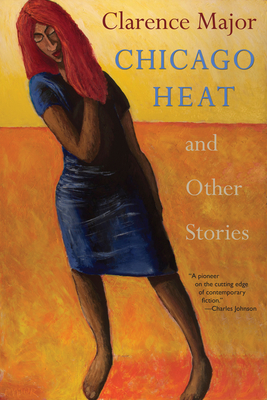 Chicago Heat and Other Stories (Hardcover)

Having written more than eight novels, including My Amputations and Dirty Bird Blues, alongside a dozen books of poetry, Chicago Heat and Other Stories is Clarence Major’s second work of short fiction and first book with Green Writers Press.

Chicago Heat and Other Stories employs a gorgeous purity and simplicity of language in a series of masterful stories exploring human interaction. Each narrative voice comes forward all at once, individual and complete, without obstacle or complication, enabling the reader to see the characters and feel their emotions. Major does not shy away from the bitter or the harsh; we get to hear it all. Like paint on an easel he blends lyric harmony with moxie and the blunt with the beautiful. The imagery is completely accessible and generously given. Toni Morrison comes to mind. His work is like jewels.

Clarence Major is a prizewinning short story writer, novelist, poet and painter.  As a finalist for the National Book Award he won a Bronze Medal for his book Configurations: New and Selected Poems 1958-1998.  Major was a finalist for the Los Angeles Book Critics Prize and The Prix Maurice Coindreau in France. He is the recipient of The Western States Book Award, The National Council on The Arts Award, a New York Cultural Foundation Award, The Stephen Henderson Poetry Award for Outstanding Achievement (African-American Literature and Culture Society of The American Literature Association), the Sister Circle Book Award, two Pushcart prizes, the International Literary Hall of Fame Award (Chicago State University), the 2015 Lifetime Achievement Award in the Fine Arts, presented by the Congressional Black Caucus Foundation, and other awards.  He is Distinguished Professor Emeritus at the University of California at Davis.


Praise For Chicago Heat and Other Stories…

"Clarence Major has a remarkable mind and the talent to match."--TONI MORRISON

"[Clarence Major is] a pioneer on the cutting edge of contemporary fiction."--CHARLES JOHNSON

"Clarence Major's...gathering of short stories has extraordinary technical and emotional force, that pushes the form to its contemporary limits without losing contact with its sources in legend, tall-tale, conte, year...Major..proves that he is one of only a handful of American writers capable of doing significant work in more than one genre."--RUSSELL BANKS

"Chicago Heat and Other Stories is the kind of collection that deepens the reader's understanding of human beings, of inner and outer landscapes...[This is] an experience delivered to us in sentences written out of utter clarity...The book is, in fact, a vision...This is a book to which you feel gratitude for its having been written, and for its invitation to you to read it."--LAURA KASISCHKE

"Clarence Major's masterful stories have the calm, the composure and the profound authority of life authentically lived."--MADISON SMARTT BELL

"Unforced, heartfelt and true, these stories are tonic for the soul."--GISH JEN

"When was the last time you finished a collection and felt that every story in the book was one the author absolutely had to write? That's how I felt after reading Clarence Major's magnificent Chicago Heat and Other Stories. There's so much urgency in these pages, so much real human drama, not to mention a level of stylistic mastery most of us will never come close to achieving. I have long believed that Major is an essential American writer. This superb collection offers further proof."--STEVE YARBROUGH

"The subtle fire that ripples under this amazing collection--from its...'Chicago Heat' to its ingenious reinventions of the hard-luck love story--is Clarence Major's uncanny knowledge of American life, coasts to heartland, past and right now. All of our democracy is alive in these pages, wrestling with secrets, fears, and attractions, and each character's private struggle leads to startling revelations: about us. New work by Clarence Major is always a literary event, and the purely innovative Chicago Heat and Other Stories give us this treasured storyteller...at the height of his superpowers."--JOHN BECKMAN

"Clarence Major...steps into [his characters] as if donning a new skin. They present themselves from within their own situations and the reader describes them in his mind as they shimmer on the orders of change. Many times I wanted to shout out 'But that's me!'...The writing is clear and without adornment. A universal human narrative...Clarence Major is a great American storyteller, a national treasure."--STEVE KATZ

"If Clarence Major gets at the difficulty of knowing other people in these fine stores, he is equally perceptive when it comes to what we fail to see in our own selves. Dense with richly portrayed lives, the stories in Chicago Heat and Other Stories are also full of lacunae. The results is a book that feels deeply human, at once mysterious and full."--ELIZABETH GRAVER

"With the lightness and brevity of sketches and the emotional depth of memoirs [Clarence Major] explores the complexity and mutability of relationships between the sexes, races, and generations. Major's hand is swift and his eye is sharp...the title story...is a tour de force..."--JOHN KEENE

"From an American original, stories that possess the beauty, the strangeness, and the jagged edges of life itself."--PETER TRACHTENBERG

"The stories...sizzle with tension and eroticism...they are insightful about women, intimacy, relationships, love and loss, travel, nostalgia for growing up, for lost places, people...these kindhearted, profound and subtle stories will stay in your heart.:--LAURA MARELLO

"There's a quirkiness to these stories reminiscent of [Raymond] Carver, but Major also infuses them with a wisdom and humor and surreal candor all their own. An artful collection you'll long remember.:--MARK WISNIEWSKI

"This short story collection form National Book Award finalist Major, who works successfully in multiple genres, shows why Nobel Prize winner Toni Morrison is such a supporter of his work. Whether writing from the perspective of a black man, white woman, teenager, artist, or nurse, he creates embodied, engaging characters who observe events carefully and grow within their stories. While there is a certain omnipresence in the works, Major is able to capture the ambiguity of the human condition. For instance, Driving Kenneth Home tells of two male coworkers having dinner together. Both were once married to women, so we're uncertain of their attraction to each other--and perhaps they, too, are uncertain. Some stories, such as Girl in a Boat and Temporary Business, have a clear finality, while others, such as Innocence, allows readers to envision what occurs after the story ends. Weaver is told from the viewpoint of a white man who murders his common-law African American wife in the Jim Crow South, while Sketch is a more intimate tale with a narrator who is a painter--as is Major. Recalling the work of African American writer Henry Dumas, this work will appeal to all readers of literature."--LIBRARY JOURNAL, starred review **

"For over 45 years now, Clarence Major has been on the cutting edge of literature... [In] Chicago Heat and Other Stories... the narrative voice... [is] soothing...which, in some uncanny way, has the effect of heightening the readers' anxieties, as if they were staring into a clear body of water bracing for an unseen mass from below to finally reveal itself before rushing to the surface."--RICHARD PRICE

"In these searing short stories Clarence Major plumbs the depths of our relationships with all their darkness and bizarre twists and at times even the joy they can bring us. Romantic love itself is pretty risky business in this world in which betrayal and disappointment are the norm. A world in which a wife can drive her husband home and not realize that he is dead. And yet at the same time he manages to show us the resilience of the human spirit. Somehow we will touch one another and we will go on. There's a cumulative build to these stories as if Clarence Major is quite literally turning up the heat."--MARY MORRIS

"These Stories execute the peeling away of artifice...the cumulative effect is kinetic."--LUCY CORIN

"Poet/painter/novelist Major...gives us a new collection of 23 short stories that explore the full range of the human condition. Temporary Business, the opening tale, concerns itself with the potent drama of two people who have just begun to live together. With her own marriage in crisis, Isa, described as being intelligent, with a 'great splash of red hair' and a 'musical voice' has invited herself to stay with Edward, an old friend of her mother;s and figure out what she wants next. Wading through the undercurrents of sexual tension, Isa and Edward bicker over his eating habits and 'make love in the afternoon, lying across the bed, half-dressed.' Major brilliantly hones in on the specific, detailed moments of their lives to articulate the intricacies of character and relationships, like bright swatches of color across a dark canvas. here is an elegant union of craftsmanship and emotional truth. Further into the collection, Major showcases his ability to use different styles to enhance the telling of a tale. The title story is a Shakespearean monologue of death and family drama set during the hottest days of a Chicago summer, couched in the guise of a single phone call. Of particular note is the frank, matter-of-fact exploration of sexuality that permeates various tales, among them, 'Gelasia's Problem,' 'Girl in a Boat,' and "Driving Kenneth Home.' Here we have the best literary fiction: visceral characters and compelling plots. However, the brief length Major favors sometimes precludes a level of reflection that would add depth to each individual piece. With Major's attention to rhythm and the musicality of language, the results is a delightful feast for the senses."--KIRKUS REVIEWS

"Clarence Major [is] one of our most accomplished technical innovators...this new book [is] radiant..."--JEFFERY RENARD ALLEN

"Clarence Major is a consummate artist...the reader is in for a treat...a feast. With astute powers of observations Major delivers...We may end up thinking we've met [these] people...somewhere"--ANA CASTILLO

"A fine book and a pleasure to read..."--STEPHEN DOBYNS

"These elegant, intimate stories offer nothing less than vibrant life on the page: Clarence Major is a wonder."--HILMA WOLITZER