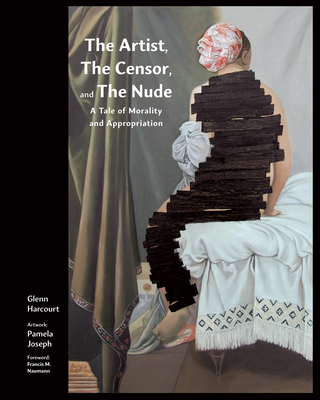 The Artist, the Censor and the Nude

A Tale of Morality and Appropriation

This hybrid book examines the art and politics of "The Nude" in various cultural contexts, featuring books of canonical western art pirated and either digitally- or hand-censored in Iran by anonymous government workers. Author Glenn Harcourt uses several case studies brought to the fore by American painter Pamela Joseph in her recent "Censored" series. Harcourt's rigorous, culturally-measured and art historical approach complements Joseph's appropriation of these censored images as feminist critique. Harcourt argues that her work serves as a window toward larger questions in art. These include an examination of the evolution of abstraction; the role of women in western society, as seen through the history of painting the body; the effects of western art on cultures outside the west (sometimes referred to in Iran as "west-toxication"); and how artists in non-western countries, specifically those in Iran living under rules of censorship that specifically prohibit representation of the body, engage with the history of western art found in the censored books.

Harcourt's discussion of Iranian contemporary artists focuses on censorship tropes in portraiture, including works by Aydin Aghdashloo, Gohar Dashti, Katayoun Karami, Daryoush Qarezad, Manijeh Sehhi, Newsha Tavakolian, and others. Issues of privacy and security prevent some Iranian artist insiders from being named, but studio images as well as recipes for removal of the censored marks along with testimony from artists who are now living outside Iran provide reference for many English-speaking readers who don't otherwise have knowledge of the country's strict policies.

Image reproductions ranging from the pages of the censored books themselves, to Joseph's paintings, to artwork by contemporary Iranian artists, make the book visually intriguing, timely, and visually fascinating reading.

Pamela Joseph: Pamela Joseph is an internationally exhibiting multi-media artist based in the Colorado hotspot for arts and culture, Aspen CO. Her work has been described as "well-executed, powerful and edgy" by the Colorado Council on the Arts, who awarded Joseph a Visual Arts Fellowship in 2001, and an artist who "epitomizes Aspen's penchant for the avant-garde." Over 13 years, her art carnival Sideshow of the Absurd garnered outstanding reviews and record-breaking crowds at ten museums. For 2003 and 2004, she was selected as a Visiting Artist at the American Academy in Rome. Solo exhibitions include those at Boulder Museum of Contemporary Art, Fine Arts Center in Colorado Springs, McKinney Avenue Contemporary in Dallas, Erie Art Museum, Gallery 101Walsh at Georgetown University, Art and Cultural Center of Hollywood (Hollywood, FL), Jonson Gallery of the University of New Mexico Art Museums in Albuquerque, William J. Bachman Gallery at the Center for Visual and Performing Arts in Munster, Indiana, and Francis M. Naumann Fine Art Gallery in New York, as well as galleries in Paris, Barcelona and Beijing. Her long running multi-media installation, Sideshow of the Absurd, is the subject of a film by Tina DiFeliciantonio and Jane C. Wagner, which premiered in April 2015 at the Aspen Shortsfest and is currently being shown to acclaim in Filmfests nationwide. Glenn Harcourt: Glenn Harcourt writes about the history of art and visual culture. He has advanced degrees from the University of California, Berkeley and Yale. A contributor to various Los Angeles-based arts journals, as well as "Representations," the "Archive Journal," and other publications, Harcourt has also been shortlisted twice for the prestigious Andy Warhol/Creative Capital Arts Writers Grant. He is currently working on several projects related to the status of the body as an object of medical inquiry, including a collaborative graphic novel on the sixteenth-century anatomist Andreas Vesalius. His most recent study, "Pathological Anatomy and Self-Portraiture" appeared in the Spanish history of science journal Dynamis. Francis M. Naumann: Francis M. Naumann is a scholar, curator, and art dealer, specializing in the art of the Dada movement and the Surrealist periods. Over his long career he has lectured at Parsons School of Design and contributed essays to dozens of art journals. Naumann, who is a scholar of Duchamp and the ready-made for over the last forty-years, is known for several books, including "Marcel Duchamp, Artist of the Century" (MIT Press, 1989), which he coedited with Rudolf E. Kuenzli; a book on Man Ray, and an edition of Duchamp's collected letters. His collection of essays about Duchamp "The Recurrent, Haunting Ghost: Essays on the Art, Life and Legacy of Marcel Duchamp" (2010) has been praised by, among others, Calvin Tomkins, art critic for The New Yorker: "Naumann's consistently fresh approaches to Duchamp's work and Duchamp's life, set down in agile and jargon-free prose, make these collected essays the single most informative book you will find on the endlessly fascinating artist."
Loading...
or support indie stores by buying on