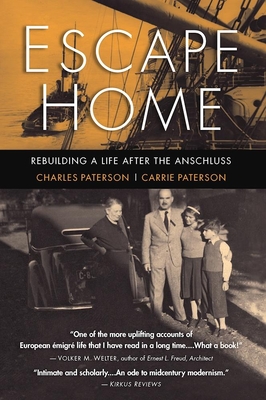 Rebuilding a Life After the Anschluss

The story of a secular Jewish family uprooted by the Nazi occupation of Austria and Czechoslovakia who flee Europe to reunite in post-war America to rebuild their lives. Based primarily on the memoir of modern architectural designer and Frank Lloyd Wright apprentice Charles Paterson (born Karl Schanzer), who was nine years old when the Nazi invasion reached Vienna, as well as newly uncovered documents and accounts of events found in letters between family members, the book is a riveting tale of discovery and coming to terms with a past that casts a long shadow. "An engrossing saga, profusely illustrated and fully documented, the stuff that makes an intriguing feature film. I heartedly endorse it."
-- Bruce Brooks Pfeiffer, Former Director, The Frank Lloyd Wright Archives "One of the more uplifting accounts of European migr life that I have read in a long time.... It will touch you to tears right away, regardless of how many accounts of similar fates you believe to have studied and understood.... What a book "
-- Volker M. Welter, author of Ernest L. Freud, Architect Adopted by the Paterson family in Australia while their father Stefan made a harrowing escape through occupied France, it would be eight years, after much sorrow and loss, before Charles and his sister Doris would reunite their remaining small family in the United States. After Charles and Stefan settle in Aspen, Colorado, amidst the snow-capped peaks that remind them of the Austrian Alps, Stefan becomes a high school teacher known for his humor and adventure stories while Charles teaches skiing, serves as a Frank Lloyd Wright apprentice, and then builds his thesis project, the The Boomerang ski lodge. Charles lives with Stefan at The Boomerang and, as Aspen grows into a world-class ski resort, spends fifty years welcoming thousands of people to the town with Austrian warmth and gem tlichkeit. Based on archival documents and letters, together with the authors' personal reflections, Escape Home is a family memoir and a meditation on the domestic qualities of architecture, where the bonds of culture and family prove to be the true foundation for rebuilding meaningful lives and finding both security and freedom.

Charles Paterson: Charles Paterson was born Karl Schanzer in Vienna, Austria in 1929 and now lives in Aspen, Colorado. As a Jewish child he and his sister were adopted by the Australian Paterson family. An architectural designer, Paterson was one of the last apprentices to train under Frank Lloyd Wright. Carrie Paterson: Carrie Paterson is an artist and writer based in Los Angeles. She writes for contemporary art journals, lectures at Southern California universities and is Publisher and Editor in chief at DoppelHouse Press. Hensley Peterson is an editor based in Aspen, Colorado. Paul Anderson: Paul Anderson is a writer of books and essays. He is a columnist for The Aspen Times.
Loading...
or support indie stores by buying on