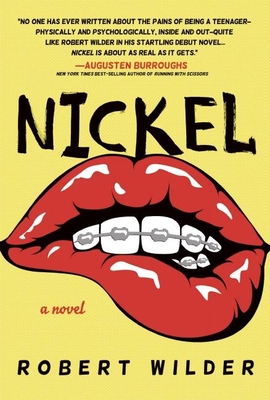 A BOOKLIST Best Young Adult Book of 2016 and a Top 10 Romance for Youth BEING A TEENAGER is hard enough without your mother in rehab and your slightly inept stepfather doing his best not to screw things up. But at least, Coy has Monroe. Coy is a quirky teenage boy and his best friend Monroe is a girl who is just as odd and funny and obsessed with 80's culture as he is. So when Monroe comes down with a mysterious illness, his inner turmoil only grows. As Monroe gets sicker and Coy gets a girlfriend from another social crowd, the balance tips and Coy has to figure out how not to give up on his friend, his family, or himself. Nickel is a hilarious, heartbreaking and honest portrayal of the complicated world of being a teenager
today. "No one has ever written about the pains of being a teenager-physically and psychologically, inside and out-quite like Robert Wilder in his startling debut novel. He has created indelible characters in Monroe and Coy-funny and sad and strong and broken-and NICKEL is about as real as it gets.
-AUGUSTEN BURROUGHS, New York Times best-selling author of Running With Scissors

Robert Wilder is the author of two critically acclaimed essay collections, Tales From The Teachers' Lounge and Daddy Needs A Drink, both published by Delacorte Press. A teacher for more than twenty-five years, he has earned numerous awards and fellowships, including the inaugural Innovations in Reading Prize by the National Book Foundation. He has published essays in Newsweek, Details, Salon, Parenting, Creative Nonfiction, plus numerous anthologies and has been a commentator for NPR's Morning Edition. Wilder lives in Santa Fe, NM.
Loading...
or support indie stores by buying on