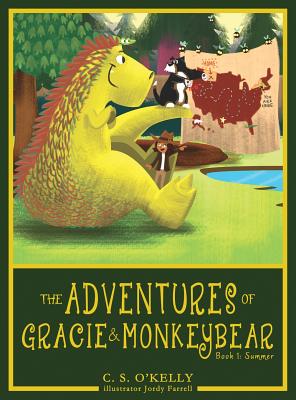 The Adventures of Gracie & MonkeyBear

A girl and her dog rescue pretend dinosaurs, aliens, and whales in this debut ode to imaginative play by O' Kelly with illustrations by Farrell.

Young Gracie wakes her dog, MonkeyBear, in the morning and makes plans for a perfect day for an adventure. MonkeyBear is clearly a genius: his room features posters of Albert Einstein, Carl Sagan, and the Parthenon, as well as a bookshelf with titles on string theory and wormhole physics among other, more immediately useful subjects. Gracie's enthusiasm is contagious, and together she and MonkeyBear begin their first mission: excavating a mystery in their backyard. There, they find a living but stuck Tyrannosaurus rex, cleverly revealed in a two-page-spread that requires readers to turn the book sideways. Gracie and MonkeyBear quickly offer to get the dinosaur out and give it directions back home. Later, the girl and her dog are startled to see a Voosurian starship that appears to be crashing. Luckily, they both speak Voosurian, a cleverly phonetic language with lots of OO sounds that kids will enjoy sounding out, and MonkeyBear even has a helpful ship-repair manual ( ROOF I will go and get it], the dog says). After designing a slingshot launcher to get their friend home, Gracie and MonkeyBear begin their third adventure, involving a whale. In this fantastic book, O' Kelly deftly manages the transitions from one adventure to the next, and Farrell's inventive, entertaining images capture the whimsy and delight of imagination. In particular, Gracie's costume changes a paleontologist's fedora and leather jacket, a starship mechanic's purple jumpsuit, and wet suit and cap to rescue the whale suit each of her missions perfectly. Also, in the various color illustrations, Gracie's skin tone is ambiguous, making it possible for young readers of many ethnicities to see themselves in her.

Young readers who love to pretend will see Gracie as a kindred spirit and look forward to future seasonal adventures in this planned kids book series.
-Kirkus Reviews (starred review)