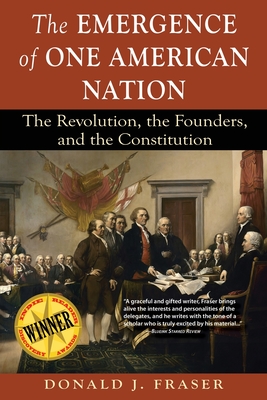 The Emergence of One American Nation

The Revolution, the Founders, and the Constitution

Divisiveness is the hallmark of American politics today. Red state versus blue; liberal versus conservative; secular versus religious; the list goes on. Sometimes it seems we are no longer one nation, but in fact we are. Division and argument have always been a part of the American scene, no more so than at our founding.

In the Emergence of One American Nation, Donald J. Fraser explores the difficulties that the founding generation confronted in molding the United States into one nation. At the heart of that endeavor was the effort to create and ratify a new Constitution for the country, one to replace the failed Articles of Confederation. Fraser not only explains the American leaders' process of constitution making, but places it clearly in the context of the separation from Great Britian, the drafting of the Declaration of Independence, and fighting the Revolutionary War.

Fraser's work not only tells of the events that led to the creation of one American nation, but also includes engaging portraits of the individuals who helped bring about the revolution and the new political order under the Constitution, including Franklin, Washington, Adams, Jefferson, Madison, Hamilton, and a host of lesser known but interesting characters.