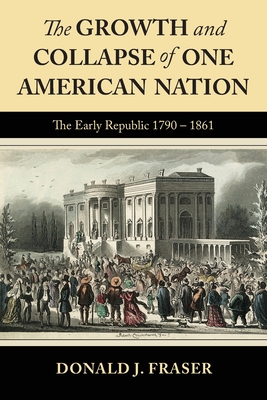 The Growth and Collapse of One American Nation (Paperback)

Our identity as one nation is fragile today, much as it was when the Civil War erupted in 1861. Lincoln, in closing his first inaugural address, warned: "We are not enemies, but friends. We must not be enemies." But too often in our time, we view those we disagree with as enemies, as members of a different nation.

That was the challenge our ancestors faced too, and they allowed their differences to devolve into a civil war. Perhaps that struggle was inevitable, since the overriding moral issue of their time, slavery, had to be eliminated. Today, we continue to face the problems of our heritage, especially racial prejudice, born out of historical experience. Perhaps lessons can be learned from history that will help in finding ways to work together for the common good.

This second volume in the American Nation series focuses on the common bonds that brought the country together during the Early Republic, including the importance of liberty and equality, the gradual growth of democracy, and those shared experiences that helped to build nationhood. It also confronts the issue of slavery, which nearly destroyed the nation. Our ancestors faced the question: Who can be an American? It is an issue with which we continue to struggle, in a diverse nation built on a creedal concept of America.

The Growth and Collapse of One American Nation covers the history of the Early Republic from 1790 to 1861. It also includes biographies of the men who made that history, including the Founding Fathers and the second and third generation of American leaders, men like Henry Clay, John C. Calhoun, Andrew Jackson, Abraham Lincoln, and Frederick Douglass.