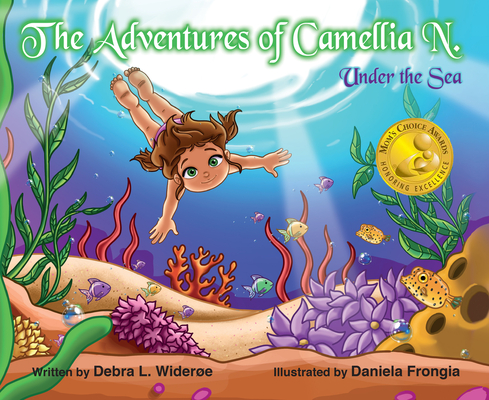 The Adventures of Camellia N. Under The Sea

The Adventures of Camellia N. “Under the Sea” (Mom's Choice Gold Seal for Excellence) is the second in a series of environmentally-focused educational storybooks targeted to early readers 5-9.  Pint-size explorer, Camellia N.’s nightly dreams take her on adventures to all seven continents, under the sea and into space where she learns about and gains appreciation for the environment, wildlife and natural resources. “Under the Sea” explores the wonders of our blue planet as Camellia N. learns what makes the ocean one of the most important and mysterious habitats on Planet Earth.

What sets The Adventures of Camellia N. book series apart are rich, educational stories filled with messaging with meaning. The book series not only entertains and educates, but encourages children to become global ambassadors.


Praise For The Adventures of Camellia N. Under The Sea…

"5 STARS
The Adventures of Camellia N. Under The Sea by Debra Wideroe is an entertaining as well as an educational book for young children. This is one in a series of books about the adventures of Camellia N. where a small child named Camellia explores and travels the world in her dreams. In this book, Camellia explores the ocean in a
dream. In this story, she finds herself underwater among the fish, sea creatures, and coral reefs. She makes friends with a fish named Oscar, among others, who introduces her to some of the plant and animal life underwater. She is then later taken on a tour in a submarine to the deeper depths of the ocean, where she
encounters creatures rarely seen who can live in almost complete darkness. During this travel adventure, Camellia meets whales, sharks, sea horses, numerous fish, and also learns about the importance of plankton and coral reefs in the ecology of the oceans. This is a great book for young children who will not only enjoy the
book as a nice story in itself, but will also learn about our environment and earth’s natural resources. The Adventures of Camellia N. Under The Sea combines story-telling with classroom education, which will hopefully help to raise a generation that is conscious of the global environment on earth. I also liked the depiction of a female leader in charge of the submarine, and that also sends a strong, subconscious message to young children on the equality of genders. What I also enjoyed about the book as much as the writing and the plot itself were the illustrations. They are colorful, vivid, and bright and indeed made me want to go back to look at them again just to enjoy the details of the drawings and the various sea creatures. Overall, this is a book that is suitable for children of any age to read or to read aloud to and I would highly recommend it." — Gisela Dixon, Readers' Favorite

"5 STARS
Imagination, dreams, the power to create, the innovative ability to entertain oneself and to do so without the benefit of technology. In this fast-paced world of electronic entertainment, this is something that is quickly disappearing from the realm of young people. And, in so doing, they are missing out on so much. Camellia N. is not afraid to use her imagination. She loves to dream, to create and to entertain herself. And, in so doing, she is also opening her mind to a world of wonderful new things to learn and appreciate. As her father tucks her into bed at night, he asks her if she’s ready for another adventure, as this is when Camellia N. has her most exciting and fascinating adventures: in her dreams. And, in these dreams, she learns so much about the world around her. Debra L. Wideroe’s charming picture book story, The Adventures of Camellia N. Under the Sea, is one in a series of entertaining and educational books for young readers. The story encourages readers to use their imagination, to dream, to create and to open their minds to learning more about the planet. In this book, Camellia N. takes the reader on an adventure under the sea, where she learns about so many fascinating creatures and sea life. With “a fish bowl on her head” to help her breathe underwater, and a yellow scooter, the little girl is well prepared for an adventure in her world of dreams. The illustrations by Daniela Frongia are colorful and really bring this story to life. Some key words throughout the story are written in bold and stand out, allowing the young reader to start recognizing new words." — Emily-Jane Hills Orford, Readers' Favorite

"Debra L. Wideroe’s educational adventure book for children, grades K-3, The Adventures of Camellia N. Under The Sea, is a sheer delight to read, no matter what your age. Each of Daniela Frongia’s masterful illustrations glows with color and intensity, and everywhere you look, you’ll find creatures of all colors, shapes and sizes peering back at you. These panels are all quite suitable for framing for a child’s bedroom, and reading this enchanting tale during story-time will be a bit more involved and exciting than with your usual picture book. There really is that much to discover on each page. Wideroe’s tale introduces the undersea environment, demystifies the dreaded shark, and explains the importance of the coral reef to earth’s ecosystem, and it teaches without ever letting on that there is some real learning going on along with the excitement and adventure. The Adventures of Camellia N. Under The Sea is most highly recommended." — Jack Magnus, Readers' Favorite

Debra Widerøe is Professor of Communication at Pepperdine University in Malibu, California with expertise in integrated marketing, advertising and media.  She received her Master’s Degree from Harvard University, specializing in children’s television marketing.  Debbie has written articles and columns for KidScreen and Sunshine Family Magazine. Previously, Debra was an executive at Warner Bros. in charge of global marketing for Looney Tunes, Baby Looney Tunes, Animaniacs and the Pinky and the Brain animated properties.  She was founder and CEO of Multi-Media Promotions, Inc., where she worked with major TV and film studios. During her tenure, she spearheaded development projects, wrote, produced and developed celebrated pro-social TV specials, PSA’s, interstitials and commercials, which included the award-winning For Kids’ Sake campaign. Through her efforts, Debra was afforded the opportunity to work with environmental leaders of change; including Sylvia Earle, James Cameron, Ted Turner and Graciela Chichilnisky.

Camellia and her friends are brought to life by the illustrations of Daniela Frongia. An Italian native, currently based in London, Daniela has illustrated over 50 children's books to date. Inspired by the Disney classics and Manga, Dany showed a passion and talent for drawing by the early age of four. She devoted her gift to the arts and has a degree from the Art School in Italy as well as a certificate in graphic design.