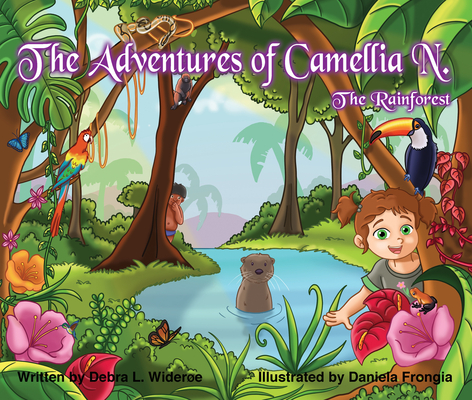 The Adventures of Camellia N.; The Rainforest

The Adventures of Camellia N. The Rainforest is the third in a series of environmentally-focused educational storybooks targeted to young readers 5-9. In this extraordinary expedition, Camellia N. awakens deep in the jungle, guided by her newest furry friends...a peculiar GIANT otter named Otto, along with quirky cotton-top tamarin, QTipp and Jacki, a jaguar who just happens to be vegan. Camellia N. discovers that the rainforest is home to half of the species of plants and wildlife on our planet and learns the critical role that rainforests play in our planet’s climate.

Debra Widerøe is Professor of Communication at Pepperdine University in Malibu, California with expertise in integrated marketing, advertising and media.  She received her Master’s Degree from Harvard University, specializing in children’s television marketing.  Debbie has written articles and columns for KidScreen and Sunshine Family Magazine. Previously, Debra was an executive at Warner Bros. in charge of global marketing for Looney Tunes, Baby Looney Tunes, Animaniacs and the Pinky and the Brain animated properties.  She was founder and CEO of Multi-Media Promotions, Inc., where she worked with major TV and film studios. During her tenure, she spearheaded development projects, wrote, produced and developed celebrated pro-social TV specials, PSA’s, interstitials and commercials, which included the award-winning For Kids’ Sake campaign. Through her efforts, Debra was afforded the opportunity to work with environmental leaders of change; including Sylvia Earle, James Cameron, Ted Turner and Graciela Chichilnisky.

Camellia and her friends are brought to life by the illustrations of Daniela Frongia. An Italian native, currently based in London, Daniela has illustrated over 50 children's books to date.  Inspired by the Disney classics and Manga, Dany showed a passion and talent for drawing by the early age of four. She devoted her gift to the arts and has a degree from the Art School in Italy as well as a certificate in graphic design.