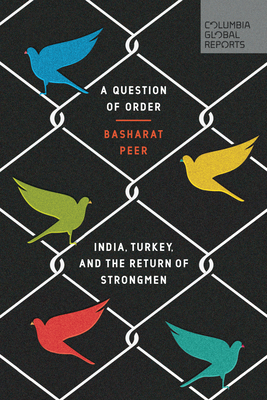 A Question of Order

India, Turkey, and the Return of Strongmen

What happens when a democratically elected leader evolves into an authoritarian ruler, limiting press freedom, civil liberties, and religious and ethnic tolerance?
India and Turkey are two of the world's biggest democracies--multi-ethnic nations that rose from their imperial past to be founded on the values of modernity. They have fair elections, open markets, and freedom of religion.
Yet this is an account of how the charismatic strongmen Narendra Modi, in India, and Recep Tyyip Erodgan, in Turkey, used the power they had won as elected heads of state to push their countries toward authoritarian ways.
Journalist Basharat Peer knows only too well how the tyranny of the majority can exact a terrible human toll; it's a story he told in Curfewed Night, his memoir of growing up in war-torn Kashmir. For this book, Peer spent a year and a half traveling across India and Turkey to chronicle the rise of Modi and Erodgan, and to tell the stories of the men and women they have victimized, who have showed courage and endured great suffering because of their love of true democratic traditions. It is more important than ever to understand the failings of democracies like India and Turkey if liberal traditions are to be protected and nourished.