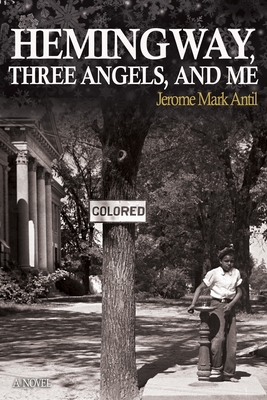 Hemingway, Three Angels, and Me tells the unique story of a boy who witnesses the prejudice of the Jim Crow era firsthand and then enlists his friends, family members, and neighbors to help Anna Kristina, one victim of that prejudice. The themes of the novel, including racial prejudice, cultural differences, coming of age, and the effects of war - WWII - will resonate with modern readers, both young and old. The moral of this story-that it is never too late to make a difference in other people's lives-is neatly summarized in the epilogue, yet the novel never feels "preachy." There aren't any unanswered questions in the novel, and the readers will feel satisfied by the ending. A post WWII historical novel.

Jerome Mark Antil is the seventh child of a seventh son-of a seventh son. Born at sunrise it's been told by Mary Holman Antil and Michael C. Antil Sr., that he was the first of eight siblings to stay awake all day and sleep through the night from the moment he was born."I remember the Pearl Harbor attack announced on our Zenith radio before I could walk. I heard Edward R. Murrow reporting the War from London... and the scratchy battle-weary ship-to-shore Morse code messages on radio while my diaper was being changed".Heartfelt fare of family and friendship-light-hearted nostalgia from the 1940s and 1950s are his favorite subjects. He revels at capturing in good detail what it was like being a kid living in a world at War and its long shadows. When the War ended, he grew up in Delphi Falls, which provided the setting for The Pompey Hollow Book Club and The Book of Charlie."My dad was a baker from the 1929 Great Depression through the post-War 1950s. As a young boy, I'd ride with him all throughout central and northern New York visiting grocers and U.S. Army bases; baseball parks and bread lines as he sold his bread, hot dog buns, pies and cakes. My Dad was 'Big Mike' and I loved listening to his timeless stories and tall tales-stopping at fishing holes along the way. All day rides with Big Mike-his Buick my Steamboat-his grand stories and an entire world at War my Mississippi."As an adult Jerry worked as a proof reader and printer's liaison, he later wrote and produced industrial sales and training films. An accomplished writer for public relations and advertising agencies, he would become Chief Marketing Officer for several prominent U.S. companies.Jerry's favorite authors are: (John Steinbeck) "Steinbeck could peer through a peephole of a person's soul." (Ernest Hemingway) "Grandpa Hemingway could establish character in a single sentence." (Sir Arthur Conan Doyle) "His Sherlock would keep me as eager for the next clue and accompanying anecdote as for the crime'ssolution." (Mark Twain) "Samuel Langhorne Clements was an irreverent observer of human foibles. His stand up was thought provoking, deceptively caustic-he was the Howard Stern of the 19th century."
or
Not Currently Available for Direct Purchase
Copyright © 2020 American Booksellers Association