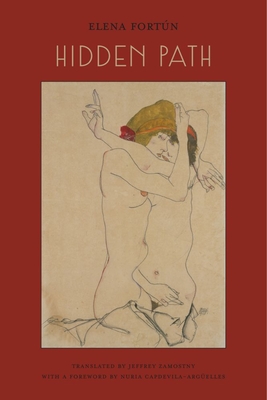 Set in early twentieth-century Spain, Hidden Path is a lyrical coming-of-age novel told from the perspective of a woman painter who struggles to find her way with art and with the women she loved. The novel is narrated in the first-person, following María Luisa as she reflects on her life from the turn of the twentieth century through the outset of the Second Spanish Republic (1931-1939). She recalls growing from an imaginative tomboy into a docile wife and mother before claiming her independence as a portrait painter in Madrid’s bohemian and queer circles. Along the way, she introduces us to a lively cast of characters who both hinder and encourage her efforts to blaze her own path. The poetic and sensuous language of María Luisa’s private reveries comingles with agile dialogue as the protagonist leads us through her life.

Best known in Spain as a writer of children’s literature, Elena Fortún left this manuscript unpublished at the time of her death in 1952, as its semi-autobiographical content risked provoking homophobic backlash under the dictatorship of Francisco Franco. The first Spanish edition appeared in 2016 and was hailed as Fortún’s adult masterpiece, a previously unknown complement to her children’s saga Celia and Her World. This edition, with Jeffrey Zamostny’s sensitive and nuanced translation, marks the novel’s first time appearing in any language aside from Spanish; it is also the first of Fortún’s works to appear in English. With an insightful foreword by scholar Nuria Capdevila-Argüelles, this volume will be an influential contribution to women’s studies, LGBT histories, and Spanish literature and culture.

“The style is very fresh; it has agile dialogue and entertaining humour. It is uplifting and powerful, intense and honest."
— University of Exeter News

"Hidden Path is a once hidden gem brought to renewed life in this well-crafted, most welcome English translation by Jeffrey Zamostny and enhanced with a helpful foreword by Nuria Capdevila-Argüelles. A painful but also moving story of a coming-out, Fortún’s novel could never have been published in Franco’s Spain and was greeted with acclaim when the first Spanish edition finally appeared in 2016. Anticipated by another significant work of feminist  fiction with lesbian motifs, Ángeles Vicente’s Zezé (1909), Hidden Path is structured through a series of season-tinted vignettes, by turns witty and lyrical, and arguing on behalf of a woman’s right to have a profession, a career, in a word, to have a life of her own. I found myself utterly absorbed by Fortún’s captivating protagonist, María Luisa, her quest to find 'the secret doorway' to liberty, and her embrace of the wildness we never grasp."
— Noël Valis, professor of Spanish at Yale University and author of The Culture of Cursilería: Bad Taste, Kitsch, and Class in Modern Spain

"Elena Fortún is one of Spain’s foremost and unique writers of the Spanish Civil War period. Unique because of her perspective, a determination to describe life from the vantage point of those whose voices are rarely listened to or even acknowledged: women and children. Virtually all of Spain is familiar with her protagonist Celia, and the series of stories portraying the life of this sassy girl in mid-twentieth-century Spain, particularly her Celia in the Revolution dealing with the Civil War. But few are aware of this wonderful previously unpublished auto biographical novel brilliantly translated by Jeffrey Zamostny, Hidden Path, written from exile in Argentina."
— Michael Ugarte, professor emeritus of Spanish literature at the University of Missouri-Columbia and author of Africans in Europe

Elena Fortún (pen name of Encarnación Aragoneses Urquijo, Madrid, 1886-1952) is the author of the twenty-volume saga Celia and Her World (1929-1951), and her work created a link between pre- and post-Civil War generations of Spanish women writers.

Jeffrey Zamostny is associate professor of Spanish at the University of West Georgia and co-editor, with Susan Larson, of Kiosk Literature of Silver Age Spain: Modernity and Mass Culture.

Nuria Capdevila-Argüelles is professor of Hispanic Studies and Gender Studies at University of Exeter.
Loading...
or
Not Currently Available for Direct Purchase