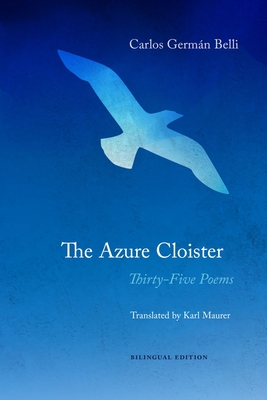 This selection of poems by internationally renowned Peruvian poet Carlos Germán Belli tempers a dark, ironic vision of worldly injustice with the “red midnight sun” of hope. Belli’s contemplative verses express faith in language, in bodily joy, and in artistic form. These thirty-five poems explore public and domestic spaces of confinement and freedom, from paralysis to the ease of a bird in its “azure cloister.”

Translations by Karl Maurer retain Belli’s original meter, follow his complex syntax, and meet the challenges of his poetic language, which ranges from colloquial Peruvian slang to the ironic use of seventeenth-century Spanish. This bilingual edition also includes notes and reflections on Belli and on the art of translation. Beyond introducing American readers to a major presence in world poetry, The Azure Cloister offers a fresh approach to the translation of contemporary verse in Spanish.

"I began reading Belli when he published his first poems, back in the fifties, in a magazine called Mercurio Peruano, and I needed only to read those half dozen texts to feel that this was a new voice, of powerful lyrical worth and great imaginative audacity, capable—as only great poets are —of transforming ugliness into beauty, sadness into stimulation, and turning to gold—that is to poetry— whatever he touches. All that Belli has written since then has only confirmed and enriched his extraordinary gift of poetry."
— Mario Vargas Llosa, Winner of the 2010 Nobel Prize for Literature

"Carlos Germán Belli is an indispensable poet, and his poetry--intimate, pure, inimitable--is waiting for us in the future. Reader, you are that future."
— Raúl Zurita, Chilean National Prize for Literature and Reina Sofia Prize for Ibero-American Poetry

"Belli attends to the emotional hues and ironies of contemporary life with the refined textures of the Spanish Baroque. His poems create dreams and landscapes of past and present where language and experience bear the traces of technological change. In this remarkable translation, as in Belli's originals, a range of linguistic registers,  times and places are woven into a seamless tapestry, and every rhythm and accent matters. Maurer has managed to invent an English idiom that captures the subtleties of a poet who—along with César Vallejo and Blanca Varela—is one of Peru's very greatest."
— Efraín Kristal, distinguished professor of Spanish, Latin American, and Comparative Literature, UCLA

Carlos Germán Belli, born in Lima, Perú, in 1927, is considered one of the most prominent poets among his generation in Latin America and Spanish literature. He has published over twenty-five books, has received a Guggenheim grant, honored with the Pablo Neruda Prize in Ibero-American Poetry, and was nominated for the Nobel Prize in 2007.

Karl Maurer (1948–2005) was professor of classics at the University of Dallas. He is the author of Interpolation in Thucydides and has translated works by Borges, Sor Juana Inés de la Cruz, Jacob Balde, and Virgil, among others.

Christopher Maurer is professor of Spanish at Boston University. He is editor and translator of Sebastian’s Arrows: Letters and Mementos of Salvador Dalí and Federico García Lorca, New Letters to a Young Poet by Joan Margarit, and The Complete Perfectionist by Juan Ramón Jiménez, all published by Swan Isle Press.