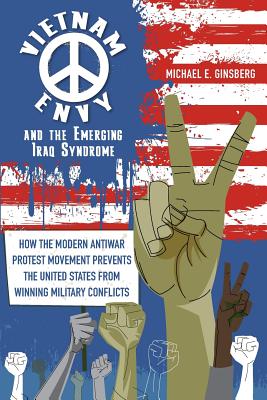 During the Vietnam War, an influential antiwar movement developed that eroded the credibility of and support for the war, created a propaganda template for those who oppose any American military campaign, and affected the United States' ability to project power for decades.

Vietnam Envy and the Emerging Iraq Syndrome is author Michael E. Ginsberg's exploration of how the lingering Vietnam War protest dynamic undercut the United States' ability to fight the Iraq War. The antiwar movement prevented policymakers from taking steps necessary to secure a lasting victory in Iraq and produced an emerging Iraq Syndrome-a post-Iraq reluctance by policymakers to credibly threaten and, if necessary, use force to protect American interests.

Ginsberg argues that a segment of Americans, from students and Sixties protestors to pop icons and journalists, are inclined to oppose any US military actions to recreate the antiwar culture of the Sixties and follow the Vietnam protest template.

Drawing from this thesis, Ginsberg identifies important parallels between the Vietnam protest movement and the Iraq War opposition. Ginsberg concludes America's always-latent antiwar movement gravely threatens the United States' ability to protect its interests but that policymakers can take steps to avoid this fate.

Michael E. Ginsberg is an attorney in Washington, DC. He holds an undergraduate degree in engineering sciences from Harvard and a Master's degree in aeronautics and astronautics from Stanford and is a 2002 graduate of Harvard Law School. Ginsberg has been in practice for the past thirteen years, including in the areas of international law, export controls, and economic sanctions. He is an expert on the implementation, enforcement, and effects of US economic sanctions on Iran, Syria, and non-state terrorist groups.
Loading...
or support indie stores by buying on