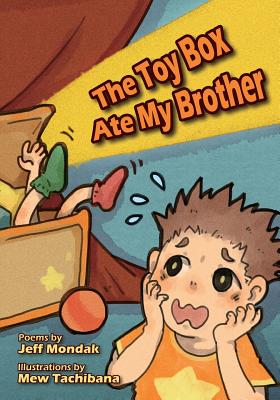 The Toy Box Ate My Brother

Works by children's poet and songwriter Jeff Mondak have been read and heard by millions of children of all ages. Jeff's poems have appeared in books and magazines in the United States, Australia, Canada, England, Germany, India, Ireland and Sweden. Many of Jeff's poems also have been made into songs, including all tracks on Sergio Wals' children's music CD Michael Closed the Bathroom Door, all tracks on Mick Brady's children's music CD Triple the Pickle, and ten songs on rock band NxT's CD Sounds Familiar. Now, in The Toy Box Ate My Brother, Jeff presents his first-ever solo poetry collection, featuring over 40 of his favorite funny poems. Each poem is accompanied by a delightful illustration by artist Mew Tachibana.