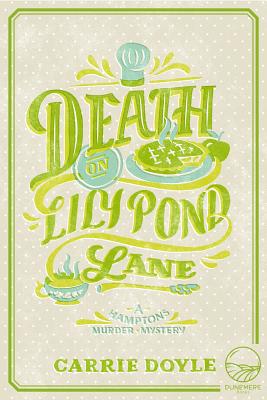 Another murder in the Hamptons, from a New York Times bestselling author Carrie Doyle.

Springtime in the Hamptons comes late, but it’s worth it! Brisk walks on the bright chilly beach, cinnamon buns at tea time, blooming forsythia and...murder?

East Hampton innkeeper and chef Antonia Bingham has settled in to town and taken on extra work as an estate manager, giving her entree her into some of the area’s most glamorous homes. Once inside, Antonia checks the heat, looks for leaks or damage, and finds the occasional dead body. Since the police can’t be trusted, it’s up to Antonia—a modern day Miss Marple, with an overly enthusiastic adoration of carbs and a kamikaze love-life—to put her skills of deduction to use.

Agatha Christie and Louise Penny fans should nestle in with a steaming mug of their favorite tea and get ready to peek behind the gates of the mansions of the Hamptons, as Antonia Bingham solves another shocking and devastating murder in Death on Lily Pond Lane, the second book in New York Times and USA Today best-selling author Carrie Doyle’s Hamptons Murder Mystery series.

The Hamptons are known for beautiful beaches, luxurious living, millionaire mansions, and now...murder

Carrie Doyle Karasyov lives with her husband and sons in New York City and East Hampton, NY. A fan of mystery and crime novels, a cooking enthusiast, a former employee of Food Network star Ina Garten’s at the Barefoot Contessa store, and a generally nosy person, Carrie combined all of her interests to create Antonia Bingham, the foodie innkeeper and reluctant detective character who stars in the Hamptons Murder Mystery series.

Carrie is the bestselling author of six novels (written as Carrie Karasyov, five of them with Odd Mom Out’s Jill Kargman), and five optioned screenplays (one of which was produced and screened at the Sundance festival), as well as a Contributing Editor to Hamptons magazine. The founding editor of Marie Claire magazine’s Russian edition, as well as a former editor at Harper’s Bazaar magazine and Harper’s Bazaar Russia, Carrie is currently developing an animated comedy series she has co-written with her 15- and 13-year-old sons. Visit Carrie’s author site at www.carriekarasyov.com for news on the next installment of the Hamptons Murder Mystery series.