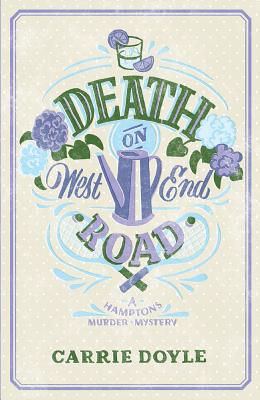 Death on West End Road is the third book in Carrie Doyle’s sophisticated but cozy Hamptons Murder Mystery Series. Along with a colorful cast of supporting characters, the beating heart of the book is Antonia Bingham, restaurateur, gourmand, and nosy carb-lover. For readers who love Sue Grafton’s Kinsey Millhone series and Alexander McCall Smith’s No. 1 Ladies Detective Agency, look no further than Doyle’s new series!

An unsolved crime is something that Hamptons innkeeper and sleuth Antonia Bingham just can’t resist. Despite a busy high-season schedule and an inn booked to capacity, Antonia has agreed to investigate a cold case in her beloved adopted hometown, East Hampton, NY: the killing of Susie Whitaker, whose brutal 1990 slaying on a tennis court in the poshest part of town was never solved.

And the person who has hired Antonia? Prime suspect Pauline Framingham, a manipulative pharmaceutical heiress from a powerful family. As Antonia attempts to unravel the mysteries of the past she unearths even darker secrets and ultimately wonders if it would have been best to let sleeping dogs lie. To make matters worse, past acquaintances and love interests reappear in the Hamptons, disrupting Antonia's world and causing her to scurry to the fridge for comfort.

Carrie Doyle Karasyov lives with her husband and sons in New York City and East Hampton, NY. A fan of mystery and crime novels, a cooking enthusiast, a former employee of Food Network star Ina Garten’s at the Barefoot Contessa store, and a generally nosy person, Carrie combined all of her interests to create Antonia Bingham, the foodie innkeeper and reluctant detective character who stars in the Hamptons Murder Mystery series. Carrie is the bestselling author of six novels (written as Carrie Karasyov, five of them with Odd Mom Out’s Jill Kargman), and five optioned screenplays (one of which was produced and screened at the Sundance festival), as well as a Contributing Editor to Hamptons magazine. The founding editor of Marie Claire magazine’s Russian edition, as well as a former editor at Harper’s Bazaar magazine and Harper’s Bazaar Russia, Carrie is currently developing an animated comedy series she has co-written with her 15- and 13-year-old sons. Visit Carrie’s author site at www.carriekarasyov.com for news on the next installment of the Hamptons Murder Mystery series.
Loading...
or
Not Currently Available for Direct Purchase