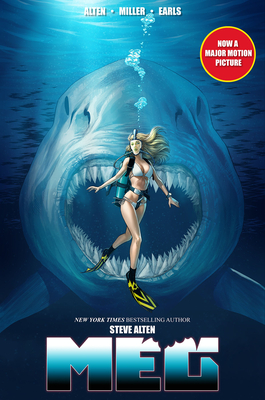 MEG: The Graphic Novel A beautifully illustrated graphic novel based on New York Times bestselling author Steve Alten's novel and Soon to Be a Major Motion Picture directed by Jon Turteltaub and starring Jason Statham as Jonas Taylor. Once a Navy deep-sea submersible pilot, now a marine paleontologist, Dr. Jonas Taylor is convinced that a remnant population of Carcharodon Megalodon--prehistoric sharks growing up to 70 feet long, that subsisted on whales--lurks at the bottom of the Mariana Trench. When offered the opportunity to return to those crushing depths in search of the MEG, Taylor leaps at the chance... but the quest for scientific knowledge (and personal vindication) becomes a desperate fight for survival, when the most vicious predator that the earth has ever known is freed to once-again hunt the surface. This graphic novel is illustrated by superstar artist Mike S. Miller, artist of George R.R. Martin's Game of Thrones prequel The Hedge Knight graphic novel and the number 1 bestselling digital comic series, DC Comics INJUSTICE.