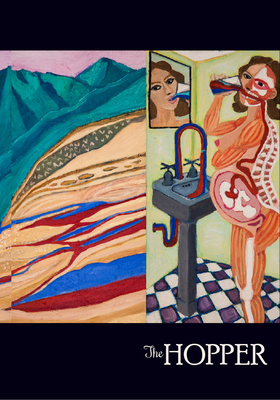 The Hopper is a lively environmental literary magazine, along with stunning visual art, from Green Writers Press that strives towards an invigorated understanding of nature's place in human life. The annual publication in a series is part of a new phase in nature writing that seeks to include a modern consciousness in narratives of place.

When used for cider making, a hopper is a wooden or metal box that collects fruits before they are funneled down through a chute to the crusher. In old Vermont towns, it was common for the community of growers to share one cider press instead of each farmer purchasing and maintaining his or her own. Come fall, people would cart their apples or pears to the farm that kept the mill, and into the hopper their fruits would go—often mixing with the products of a neighboring grower.

The Hopper believes that in order to refashion our lives to accommodate the knowledge we have of our environmental crisis, we have a lot of cultural heavy lifting to do. To reacquaint ourselves meaningfully with the natural world we have to turn our interpretive, inquisitive, and inspired faculties upon it. Through what we publish and the communities we encourage, The Hopper seeks to be a leader in this cultural re-centering and can be used for environmental education and discussion.

Jenna Gersie is a writer, editor, and educator currently based in rural northwest New Jersey. Jenna has participated in the Wildbranch Writing Workshop and the Bread Loaf Orion Environmental Writers' Conference, and she recently completed a fiction writing residency at the Vermont Studio Center. Her writing has appeared in Orion, Zoomorphic, and Kudzu House Quarterly. Her website is jennagersie.com.

Rose Alexandre-Leach leads Sprouts for Kids (Green Writers Press), where she acquires and edits picture books, middle grade novels, and young adult fiction that reflect the publisher’s environmental mission. Rose is trained as a biologist; her work with words is informed and inspired by her time in the outdoors and as a teacher. Born and raised on the river in Vermont, Rose now lives in Brattleboro.

Anna Mullen is a poet and naturalist from the suburban foothills of the North Carolina Appalachians. She studied environmental literature at Middlebury College and as a poetry fellow at Bread Loaf Orion Environmental Writers’ Conference. Anna has special love for writings about the sea, speculative fiction, animal consciousness, psychologies of climate change, and queer ecology.

James Crews’ work has appeared in Ploughshares, Raleigh Review, Crab Orchard Review and The New Republic, among other journals, and he is a regular contributor to The (London) Times Literary Supplement. His first collection of poetry, The Book of What Stays, won the 2010 Prairie Schooner Book Prize and received a Foreword Magazine Book of the Year Award. Other awards include residencies from the Sitka Center for the Arts and Caldera Arts as well as two Dorothy Sargent Rosenberg Prizes. He holds an MFA in creative writing / poetry from the University of Wisconsin-Madison and a PhD in writing and literature from the University of Nebraska-Lincoln, where he worked for Ted Kooser’s American Life in Poetry newspaper column and grew to love the Great Plains. He now lives on an organic farm in Shaftsbury, Vermont, just a few miles from the Robert Frost Stone House.