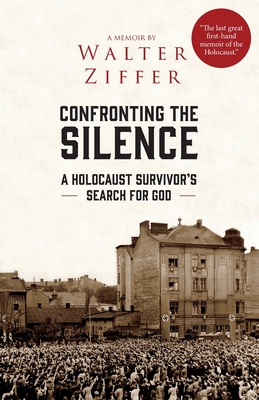 A Holocaust Survivor's Search for God

The life story of a Holocaust survivor: his prewar childhood in Czechoslovakia, his experiences in 8 Nazi concentration camps, his liberation and emigration to the USA, and his career as a General Motors engineer, a Christian minister, and a consummate teacher.
For Walter Ziffer, who today considers himself a Jewish secular humanist, life has always been a search for meaning. His compelling and insightful memoir distills the experiences of a remarkable man.


Praise For Confronting the Silence: A Holocaust Survivor's Search for God…

"The compelling story of an unfolding life carried by an insatiable search for meaning."
-- Mahan Siler, retired Baptist minister

"In Walter Ziffer's beautifully written new book, you will learn of Walter's complex life journey, and you may experience, thanks to his skillfully told story and clearly articulated questions and insights, a sense of his presence, the presence of a great man who finds in his own story lessons important for the rest of us, especially now."
-- Richard Chess, Director, The Center for Jewish Studies at UNC Asheville

Walter Ziffer was born in Cesky Tesin, Czechoslovakia, in 1927. At the age of 15, he was deported to Poland to the Nazi transit camp of Sosnowitz, then spent three years in seven slave labor camps: Sakrau, Brande, Graditz, Nimptsch, Klettendorf, Schmiedeberg, and Waldenburg (a sub-camp of Gross-Rosen). Liberated in 1945, he returned to his hometown, trained as a mechanic, and emigrated to the United States. He pursued an engineering education and worked as an engineer for General Motors, earning five patents before seeking a more rewarding life in the ministry. As a Christian minister, he taught and preached in Ohio, France, Washington, D.C. and Belgium. In retirement, he has taught at the University of Maine, the University of North Carolina at Asheville, and Mars Hill University. Through his lectures and school presentations, he estimates having touched the lives of 40,000 adults and young people. He now considers himself a Jewish secular humanist.
Loading...
or
Not Currently Available for Direct Purchase