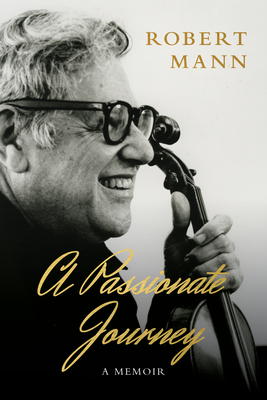 Growing up as an outdoorsy, nature-loving child in Portland, Oregon, Robert Mann wanted to be a forest ranger, but it was violin lessons—and his parents’ encouragement—that ultimately launched him on a remarkable journey that would span a lifetime and five continents as he pursued his passion for classical music as a violinist, composer, conductor, and teacher. In this fascinating and far-ranging memoir, he looks back at the struggles and triumphs of that journey, as well as the unique insights and experiences he’s gained along the way.

From their beginnings in 1947, the Juilliard String Quartet set out to play new music as if it had been composed long ago, and to play a classical piece as if it had just been written.  At first, the fledging combo struggled to compete with the more established European string quartets, while also coping with the inevitable difficulties of trying to blend four singular personalities and talents into a harmonious whole, but by the time Mann retired from the group some fifty-one years later, the Julliard String Quartet had played close to six thousand concerts on every continent except Africa and Antarctica and become an enduring, beloved institution in American music. They won three Grammys for their recordings, while sharing their distinctive sound with such notable figures as Glenn Gould, Aaron Copland, Leonard Bernstein, and even Albert Einstein.

A Passionate Journey is a collection of both spoken and written words in the form of essays, letters, lectures, and transcribed interviews from various times in his life. Together they offer an engrossing glimpse into a life filled with musical milestones and into the fascinating mind of a musical giant.


Praise For A Passionate Journey: A Memoir…

"A founding member of the Julliard Quartet, Mann retired in 1997 after 51 years to expand his work as a mentor of young talent. Twenty-one years later, at 97, he's still going strong. This delightful collection of anecdotes and reminiscences, speeches, and interviews paints the portrait of a man who knew his strengths as well as his weaknesses and built on them; someone who has lived out his joy in music-making with passion. His wisdom not just about music but life shows in how his friends, acquaintances, and collaborators respond to him: a circle that included composers Elliot Carter and Aaron Copland, virtually all the great musicians of his age, and even Albert Einstein, whom he inveigled into playing Mozart with the quartet one memorable afternoon. Austrian artist Oskar Kokoschka sketched Mann while he played for him, and Willem de Koonig once gave all the quartet members paintings, though only Mann kept his. Mann's dissections of Beethoven's and Bartok's string quartets are powerful; you don't have to play an instrument to enjoy them. VERDICT: Among his many talents, Mann is a consummate storyteller. As a consequence, this isn't just a book for music lovers but for everyone." — David Keymer, Cleveland, Library Journal