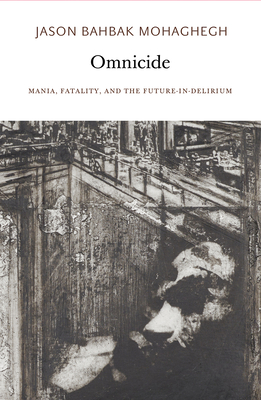 Mania, Fatality, and the Future-in-Delirium

What kind of circumstances provoke an obsessive focus on the most minute object or activity? And what causes such mania to blossom into the lethal conviction that everything must be annihilated? There is no turning away from the imperative to study this riddle in all its mystifying complexity and its disturbing contemporary resonance—to trace the obscure passage between a lone state of delirium and the will to world-erasure..

A fragmentary catalogue of the thousand-and-one varieties of manic disposition (augomania, dromomania, catoptromania, colossomania…), Omnicide enters the chaotic imaginations of the most significant poetic talents of the Middle East in order to instigate a new discourse on obsession, entrancement, excess, and delirium. Placing these voices into direct conversation, Jason Bahbak Mohaghegh excavates an elaborate network of subterranean ideas and interpretive chambers, byways, and burrows by which mania communicates with fatality. Like secret passages leading from one of the multitudinous details of a bustling Persian miniature to the blank burning immanence of the desert, each is a contorted yet effective channel connecting some attractive universe (of adoration, worship, or astonishment) to the instinct for all-engulfing oblivion (through hatred, envy, indifference, rage, or forgetting).

A captivating fractal of conceptual prisms in half-storytelling, half-theoretical prose, a rhythmic, poetic, insidious work that commands submission, Omnicide absorbs the reader into unfamiliar and estranging landscapes whose every subtle euphoric aspect threatens to become an irresistible invitation to the end of all things.

Jason Bahbak Mohaghegh is Associate Professor of Comparative Literature at Babson College. He is the author of The Chaotic Imagination; Inflictions; The Radical Unspoken; Insurgent, Poet, Mystic, Sectarian; and Elemental Disappearances (with Dejan Lukic. He is coeditor of Manifestos for World Thought, and Cofounder of the 5th Disappearance Lab (www.5dal.com).
Loading...
or support indie stores by buying on