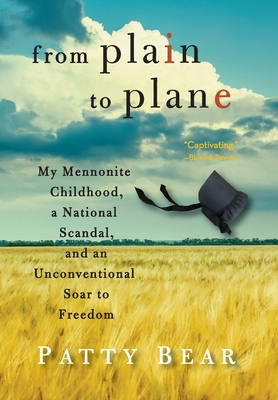 From Plain to Plane

My Mennonite Childhood, a National Scandal, and an Unconventional Soar to Freedom

Patty Bear grew up among the "Plain People" amidst bountiful farmlands, black bonnets, and black cars. It was a world unto itself, both bucolic and beastly, with traditions and beliefs from the old world deeply rooted in the fertile soil of Central Pennsylvania.

Insulated by a culture that steadfastly kept its distance from outsiders and the march of progress, as a little girl she anticipated following in her mother's footsteps. But in 1972, at the age of eight, her father sparked religious controversy and ignited a scandal rare in the Mennonite community. Abruptly subjected to the chaos that surrounded the ritual practice of shunning, Patty, her mother, and five siblings were swept into a tornado of absurd accusations and public humiliation, forced to hide and endure publicity that headlined prominent national newspapers for almost a decade.

With her childhood and adolescence overshadowed by domestic violence and her father's abusive rhetoric, as well as persistent teaching by the Church that women were designed for subjugation and obedience, Patty's assumed image of her future gradually shifted-leading her to heed the call of her wild soul and the whispers of her Guides toward a bold quest for freedom she never imagined possible.