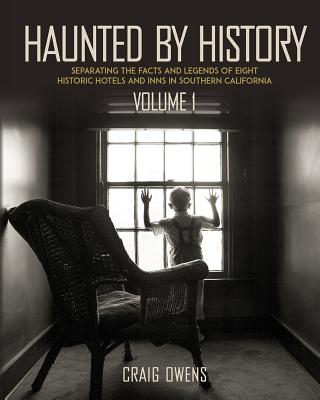 Haunted by History, Volume I, by Craig Owens uncovers little known facts about eight prominent historic hotels in Southern California and the origins behind many of their ghost stories. Not only does his well-documented research separate facts from legends, but Owens also keeps the subject matter interesting by interweaving historic photos with his own elaborately staged Old Hollywood-style photos shot in the most haunted rooms, hallways, and lobbies. This unique book blends solid research, fascinating insights, and haunting photography that will appeal to believers and non-believers alike. Hotels and inns featured in Vol. 1 are the Hotel del Coronado, the Victorian Rose Bed & Breakfast, the Julian Gold Rush Hotel, the Mission Inn Hotel & Spa, the Alexandria Hotel, the Wyndham Garden Pierpont Inn, the Banning House Lodge, and the Glen Tavern Inn.

Craig Owens first fell in love with history and the paranormal in 1972. At that time, he was as a seven-year-old boy playing on the grounds of a Southern plantation known as Waverley, located outside of West Point, Mississippi. While Waverley's owners admitted to seeing and hearing the ghost of a young female child, Craig never encountered her. Yet the atmosphere and history of Waverley stayed with him long after his family moved to Texas. In 1994, Craig moved to Los Angeles and began to work freelance in the film and television industry. His production credits include Wag the Dog (1997), Phone Booth (2000), and The Gilmore Girls (2000-2001). In 2002, Craig left film production to work for the Century City Chamber of Commerce and later the International Cinematographers Guild, I.A.T.S.E. Local 600. While working for the chamber of commerce, he contributed articles for the Century City View and wrote the History of Century City. In 2009, Craig began staging vintage style photo shoots at haunted hotels as an idea for an Old Hollywood themed project. While on location, he saw what appeared to be a "ghost." This left him wondering if his photo shoots were somehow triggering paranormal activity. The following year, he started his Facebook blog, Bizarre Los Angeles, a page dedicated to Los Angeles’ forgotten history. He also continued to hold vintage photos shoots at haunted locations. Little did he know that his love for haunted hotels would bring media attention. In 2013, he appeared on My Ghost Story: Caught on Film after he unintentionally photographed an apparition at the Palomar Inn in Old Town Temecula. The following year, the online magazine, The Verge, published an article on his paranormal experiences at the Aztec Hotel. Since that time, he's been quoted in James Bartlett's book, "Gourmet Ghosts 2," and Colin Dickey's book: "Ghostland: An American History in Haunted Places." More recently, he has appeared on Nerdist's popular "Bizarre States" online podcast. Craig Owens has now gained notoriety for his photography and his passion for historical research. While he firmly believes that ghosts exist, he is reluctant to accept all paranormal theories, superstitions, and ghost hunting techniques. He instead approaches the subject with a good deal of skepticism, critical thinking, common sense, and a sense of humor.

Praise For Haunted by History: Separating the Facts and Legends of Eight Historic Hotels and Inns in Southern California…

"Owens’s gorgeous photo stagings recreate the romantic and heady days of each lodging while adding dashes of visual humor, subtle sensuality, and haunting atmosphere. Lavishly illustrated and handsomely produced, the book’s entertaining and informative narrative dwells on the documented facts while dispelling most of the colorful myths.”  —Publishers Weekly

“You don’t want to miss this one. It is an excellent account of history and all that entails for the Glen Tavern Inn/Santa Paula and all the other historical inns and hotels in Southern California.”  —Glen Tavern Inn

“More than just a collection of ghost stories, Craig has put together an encyclopedic history of haunted hotels in southern California that don't just draw from pre-existing sources or travel guides but rather from his own research, immersion, and (gulp!) first-hand encounters . . . Don't be afraid to add this book to your collection and make your bookshelf or coffee table just a little bit spooooOOOOooookier."  —John Cason, co-host, Ghosting Around podcast