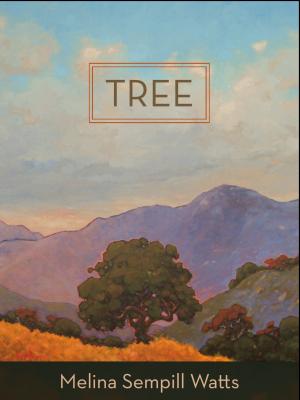 "Tree" is a novel about a tree written from a unique point of view: the chief narrator is a tree. "Tree" uses magical realism as a key to access the interrelated emotional realities of the many species that share one pristine valley in Topanga, California. Grass, birds, other trees and animals come to life on the pages, while one 19th century Mexican woman and one 20th century school boy, hearts opened by grief and loneliness, come to know one California live oak whose 229 years span the evolution of four human civilizations, Chumash, Spanish/Mexican, Yankee and new money Hollywood, which each leave their mark upon the landscape and upon "Tree." The author's obsessive botanical, scientific and historical research give substance to a world that feels both as real as last weekend's dust on hiking boots and as mind altering as a fully fledged mystical experience. You'll never see Mexican spranglegrass the same way again. Take a journey into the heart of the woods where every plant shines. "Tree" will change how you see nature.

"If trees have standing before the law, as many argue, then they might very well also have standing in historical fiction as Melina Sempill Watts demonstrates in this intriguing new novel ... Blending environmentalism, magical realism, social history, and arboreal science, 'Tree' challenges ... readers to regard the natural world with new respect." --Dr. Kevin Starr, USC professor of California history

"When we talk about environmental literature today, we pretty much mean non-fiction -- and there , there are acres of important books that come out on endangered species, policy, restoration work, science, engineering, sustainability, gardening, environmental justice, memoirs -- the list is endless. But when it comes to the literature of the environment, meaning potential candidates for the great American environmental novel, since 'The Monkey Wrench Gang' and 'Ishmael,' our shelves are nearly empty. 'Tree' is a bold new candidate in this category: a dive into the imagined interior realm of plants and the animals and people who love them, into the culture, history and ecosystems of the Santa Monica Mountains." --Aaron Mair, 2016-2017 Sierra Club President

"A debut novel tells the story of life in a California valley through the eyes of a tree. The hero of this book is, as the title suggests, a tree. Specifically, a live oak that germinates in Topanga in the 18th century. The tale begins, more or less, at the protagonist’s conception: a new acorn drops from a tree and is picked up by a blue jay, which is in turn snatched by a hawk. The acorn falls from the hawk’s talons high in the air and comes to rest in a crack on the dry valley floor. It waits for days in the arid dirt until a mountain lion kills and eats a deer over the crack, coating the acorn in blood: 'And the acorn responded to sudden moisture as seeds do. Things uncoiled and uncurled inside.' From there, Watts takes the reader on a journey through more than two centuries of California history with Tree right at the center, from the struggles of the surrounding animals and plants who serve as the oak’s neighbors to the human settlers—Chumash, Spanish, American, and contemporary Angeleno—who alter the face of the valley. The saga of 'Tree' becomes a window into the immensity of nature, simultaneously dynamic and everlasting, and the ways that humans have come to upset the ancient balance. Watts writes in an elegant, highly detailed prose that shows an incredible knack for chronicling the minutiae of the natural world. Even more impressive is her ability to wring narrative from the most common interactions, reminding readers of the Homeric drama unfolding all around them, at every level of life. She makes the most of the novel’s conceit, going so far as to use a Tree-specific pronoun: e instead of he or she. Far from cute, this book takes a serious look at the value of love, the impossibility of permanence, and the ways in which humans leave the world. For anyone wondering about the outcome, Watts closes the work’s first paragraph with the reminder that 'there is no happiness. Only serenity lasts.' An ingenious and satisfying tale about a single live oak." --Kirkus

Melina Sempill Watts' writing has appeared in "Sierra Magazine," the "New York Times" motherlode blog, "Earth Island Journal" and "Sunset Magazine," in local environmental venues such as "Urban Coast: Journal of the Center for the Study of the Santa Monica Bay," the Heal the Bay blog and in local papers such as "Malibu Times," "Malibu Surfside News," "VC Reporter," "Topanga Messenger" and "Argonaut News." She appeared on a panel at the L.A. Times Book Festival in April 2017. Watts began her career in Hollywood as a development executive, writing consultant and story analyst working for such luminaries Frank Marshall, Kathleen Kennedy and Peter Horton and at Dreamworks. She has worked as a watershed coordinator, run a stable, shelved books at a library and created, marketed and ran Starfish Catering. Watts graduated from UCLA with a degree in history. She lives in California.
Loading...
or
Not Currently Available for Direct Purchase