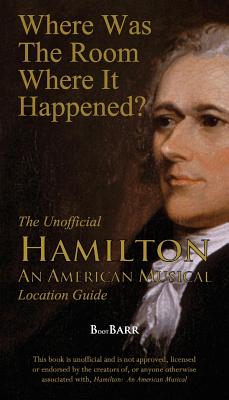 Where Was the Room Where It Happened?

Learn all about where Hamilton happened (the man and the musical) A collection of facts, anecdotes and trivia related to the Broadway show Hamilton: An American Musical and the life of Alexander Hamilton, presented through the locations where it all happened. This guide explains how locations from Hamilton's life are connected to the songs and settings in the musical and provides historical information about each location. With suggested itineraries, maps and subway directions, this guide makes it fun and easy for all fans interested in learning about or seeing the room where it happened.

A great gift for any fan of the Broadway show Hamilton or its songs, or anyone interested in Alexander Hamilton or Revolutionary-era history, regardless of whether they ever intend to visit New York.

The focus of this book is New York City and the immediate vicinity, and for each New York City location in the book (and some of the New Jersey locations), the reader is given which songs occurred at the site, an address, map and subway directions for getting to the site, opening hours (where relevant), a description of which historical figures from the show were ever at the site, and a brief history of the site (with a focus on historical information related to characters from the show). It also includes information on other Alexander Hamilton related locations in the city (that have no relation to the show).

For example, the book explains that the song Right Hand Man includes references to events that occurred at each of the Battery, Richmond Hill and Morris-Jumel Mansion, and it includes images of these locations (which may be historical images for sites that no longer exist), a map and subway directions for visiting these sites. In addition, it explains that not only did Richmond Hill serve as George Washington's temporary headquarters (and was the site where Washington first met Aaron Burr), but also that Richmond Hill was the residence of John Adams during his vice-presidency and later was the residence of Aaron Burr, before ultimately being razed and having a portion of the estate become a New York City historical district.

While the focus is New York City, the book also includes information on sites in New Jersey related to the show (including Weehawken, NJ, where the famous Hamilton-Burr duel occurred), including information on how to travel to these sites. Finally, it includes sites outside of New York City and New Jersey to explain the connection with the songs from Hamilton but without information about visiting the sites.

The book includes photographs and other images and is indexed (including an index by song title) to make the information easier to use and to make this book a useful reference guide for someone wanting to travel to the sites or wanting to learn more about the history around the events depicted in Hamilton - An American Musical.


Praise For Where Was the Room Where It Happened?: The Unofficial Hamilton - An American Musical Location Guide…

RICHARD BROOKHISER, author of Alexander Hamilton, American: Where was that room? This book will tell youa sprightly, informative guided tour of the hit show, and founding era New York.DOUGLAS HAMILTON, 5th great grandson of Alexander Hamilton: This book wonderfully ties Hamilton the musical to Hamilton the manRAND SCHOLET, President & Founder of the Alexander Hamilton Awareness Society: This well-researched book invites the reader to join Alexander Hamilton where it happened; to experience where he lived, learned, worked, fought, and found his final resting place. Author Bryan Barreras identifies the specific references from Hamilton and accurately describes the highlights for each location, as well as the path to get there. Fans of the musical, as well as current and future Hamiltonians, will appreciate this invaluable location guide.