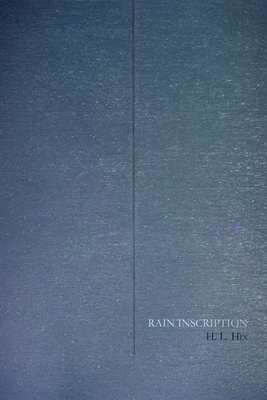 H. L. Hix's Rain Inscription gives vivid testimony to the paradox that human making is both lasting and fleeting. Its three sections (a sonnet-sequence Q&A with contemporary cultural studies, a renewal of the sayings of Herakleitos and Jesus, and a group of dialogues with contemporary artists) extend an already capacious dialogue beyond its prior limits.

H. L. Hix has published twelve books with Etruscan, including Chromatic (2006), a finalist for the National Book Award. Other awards include the T. S. Eliot Prize, the Peregrine Smith Award, and fellowships from the NEA, the Kansas Arts Commission, and the Missouri Arts Council.

H. L. Hix has published an anthology, Wild and Whirling Words: A Poetic Conversation (2004), and 11 books of poetry and literary criticism with Etruscan, including Shadows of Houses (2005); Chromatic (2006); God Bless: A Political/Poetic Discourse (2007); Legible Heavens (2008); Incident Light (2009); First Fire, Then Birds (2010); As Easy As Lying: Essays on Poetry (2002); Lines of Inquiry (2011); As Much As, If Not More Than (2014); I'm Here to Learn to Dream in Your Language (2015); and American Anger: An Evidentiary (2016). In addition to having been a finalist for the National Book Award for Chromatic, his awards include the T. S. Eliot Prize, the Peregrine Smith Award, and fellowships from the NEA, the Kansas Arts Commission, and the Missouri Arts Council. He earned his Ph.D. in philosophy from the University of Texas at Austin, taught at Kansas City Art Institute, and was an administrator at The Cleveland Institute of Art, before accepting his current position as professor in the Philosophy Department and the Creative Writing Program at a university in "one of those square states." He has been a visiting professor at the University of Texas at Austin and at Shanghai University, and a Fulbright Distinguished Professor at Yonsei University.
Loading...
or support indie stores by buying on