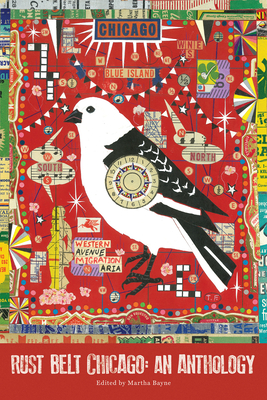 Chicago is built on a foundation of meat and railroads and steel, on opportunity and exploitation – but its identity long ago stretched past manufacturing. Today, the city continues to lure new residents from around the world, and from across a region rocked by recession and deindustrialization. But the problems that plague the region don’t disappear once you pass the Indiana border. In fact, they’re often amplified. A city defined by movement that’s the anchor of the Midwest, bound to its neighbors by a shared ecosystem and economy, Chicago’s complicated – both of the Rust Belt and beyond it.
Rust Belt Chicago collects essays, journalism, fiction, and poetry from more than fifty writers who speak both directly and elliptically to the concerns the city shares with the region at large, and the elements that set it apart. With affection and curiosity, frustration, anger, and joy, the writers sing to each other like the bird on the cover. At times the song sings in harmony and at others sounds in notes of strategic dissonance. But taken as a whole, this book sings one song, responding to one cacophonous city.

Martha Bayne is a Chicago writer and a senior editor with Belt Publishing. Her work has appeared in publications such as The Baffler, Chicago Reader, Latterly, The Rumpus, and Belt Magazine.

"A lively grab bag of essays, fiction and poetry that reads at times like who’s who of contemporary Chicago writers/residents."  —Chicago Tribune