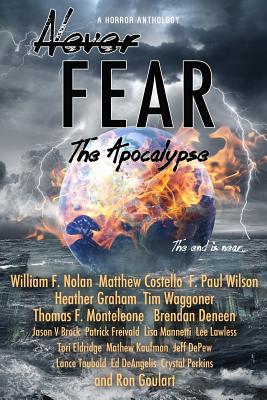 The End Is Near

Apocalypse-definition: the complete final destruction of the world, especially as described from the Book of Revelation in The Bible; an event involving destruction or damage on an awesome or catastrophic level.
Eighteen bestselling and award-winning authors have contributed their visions of the apocalypse: Classic sci-fi writer William F. Nolan adds to his canon with a tale from his futuristic Logan's Run series.
Creator of the popular Repairman Jack series, F. Paul Wilson presents his vision of a world where vampires have become the ruling race.
Bestselling author Heather Graham serves up her apocalyptic nightmare.
Horror master Tim Waggoner terrifies with a tale of the World After.Master writer, screenwriter, and creator of classic video games Matthew Costello offers up a post-apocalyptic tale of terror, cannibalism, and a vacation gone so wrong.
Icon of classic science fiction and fantasy, Ron Goulart, spins a tale of futuristic famine and desperation.
Also new stories from the new breed of award-winning authors including: Jason V Brock, Lisa Mannetti, Patrick Freivald, Lee Lawless, Tori Eldridge, and Brendan Deneen. Is this the end of times? You decide.