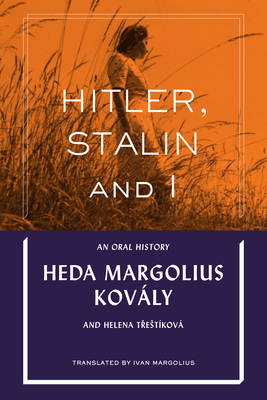 Hitler, Stalin and I

The oral history of a renowned Czech writer, whose optimism and faith in people survived grueling experiences under authoritarian regimes.

Heda Margolius Kov ly (1919-2010) was a renowned Czech writer and translator born to Jewish parents. Her bestselling memoir, Under a Cruel Star: A Life in Prague, 1941-1968 has been translated into more than a dozen languages. Her crime novel Innocence; or, Murder on Steep Street--based on her own experiences living under Stalinist oppression--was named an NPR Best Book in 2015.

In the tradition of Studs Terkel, Hitler, Stalin and I is based on interviews between Kov ly and award-winning filmmaker Helena Trest kov . In it, Kov ly recounts her family history in Czechoslovakia, starving in the deprivations of Lodz Ghetto, how she miraculously left Auschwitz, fled from a death march, failed to find sanctuary amongst former friends in Prague as a concentration camp escapee, and participated in the liberation of Prague. Later under Communist rule, she suffered extreme social isolation as a pariah after her first husband Rudolf Margolius was unjustly accused in the infamous Sl nsky Trial and executed for treason. Remarkably, Kov ly, exiled in the United States after the Warsaw Pact invasion in 1968, only had love for her country and continued to believe in its people. She returned to Prague in 1996.

Heda had an enormous talent for expressing herself. She spoke with precision and was descriptive and witty in places. I admired her attitude and composure, even after she had such extremely difficult experiences. Nazism and Communism afflicted Heda's life directly with maximum intensity. Nevertheless, she remained an optimist.

Helena Trest kov has made over fifty documentary films. Hitler, Stalin and I has garnered several awards in the Czech Republic and Japan.